A musical fantasy recalls a dark day for gays

The cast of Speakeasy Stage’s “The View Upstairs” sing “Give Me a Sign.” Photo: Nile Scott Studios

BOSTON – As the celebration of Boston’s annual Pride Week continued on the streets of the city, a group of actors were observing the occasion in a very different way: By retelling the story of what was very recently the worst case of anti-gay carnage in the country’s history.

Using the event as a springboard, Max Vernon has fashioned the musical “The View Upstairs,” now being presented by Speakeasy Stage Company through June 22 at the Plaza Theatre in the Boston Center for the Arts.

It is loosely based on the actual events of 1973, when 32 people died in a fire in the Upstairs Lounge, a gay bar in the city’s French Quarter. Arson was suspected but no one was ever charged, and the incident remained the worst mass killing of gay people until The Pulse nightclub shootings claimed 49 lives.

It’s 1973 New Orleans, and Upstairs is the gay bar fashioned in the eye of scenic designer Abby Shenker, whose bar is colorful and bright, with a white piano, and a conspicuous  nude photo of Burt Reynolds.

“The View Upstairs” actually opens in present day when Wes (J’Royce Jata), a much-talked-about designer bailing out of the Big Apple, buys a long-abandoned building. As Wes surveys his surroundings, he is magically transported back to 1973, when the building’s second floor was the Upstairs.

He becomes a stranger in a strange land, forced back to a time when gays had virtually none of the hard-fought rights they would ultimately gain. He is armed with the knowledge of what is to come (“The Future is Great”) and the technological marvels ahead but unable to bring great comfort to those being oppressed and tormented. 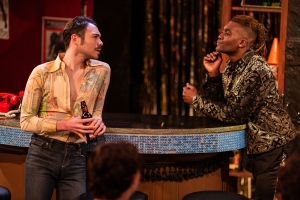 In telling the tale of a disparate and eclectic group of men and women taking refuge in the bar , Vernon has fashioned a 70s rock-based score that offers hints of disco; it will allow each of the men and women in turn  to have a say about their lives and their circumstances, while also banding together for production numbers  such as “Some Kind of Paradise.” Or “The World Outside These Walls” with choreography by Allessandra Valea.

While “Upstairs” is an  ensemble piece with interlocking parts, there ser a few who are first among equals. Eddie Shields is simply sublime as Patrick, who has been on his own since he was a young man, and quickly attracts the attention of Wes, unused to and uncomfortable about  getting up close and personal with someone without having seen “pictures” first.

Davron S. Monroe is accused of grand theft: scenes as Willie, a diva who struts and sashays around the Upstairs, talking and singing about feats and accomplishments both real and imagined, and offering advice, wanted or unwanted.

Speakeasy regulars Russell Garrett and Will McGarrahan are well-cast as Richard, the clergyman preaching patience and ministering to his beleaguered flock, and Buddy, a married musician still in the closet, but resentful that whispers about his sexual orientation might have cost him a career.

Shawn Verrier is a young Latin drag queen named Freddy, whose cross-dressing has frequently attracted the unwanted attention of the New Orleans police. Standing by his side is his loving mother Inez (Johanna Carlisle-Zepeda, so wonderful in Lyric’s “Kiss of the Spider Woman”), a stand-in for every parent who accepts her son or daughter the way they are, with no ifs, ands or buts.

Even among the gays who are largely outcasts from society, there is a hierarchy,  and far down on the totem pole is aggressive hustler Dale (Jared Troilo) who often finds himself running afoul of the rules set down by bar owner Henri, winningly played by Yewande Odetoyinbo, the author of several fine recent performances. Vernon crafts for Troilo‘s Dale a fine musical moment with “Better Than Silence.”

Audience members have been seated at tables right in the middle of the action onstage to make the experience even more immersive.

One of  Paul Daigneault’s great strengths as a director is casting, and operating from many years of experience with local talent and an eye for up-and-coming talent here and on the NYC scene, he is able to land the right actors for the right roles.

Vernon, 31, said in a print interview that “The View Upstairs” is about community, and that the shared experience of the oppression suffered by gay men in the 1970’s brought them together. He said that while progress has been made allowing them to be free and open in their expression of who they are, “our community has never been more fractured.”

There are moments  near the end of “The View Upstairs”  when Vernon appears to be looking hard for a place to land the plane, but that doesn’t really detract from what is a well-constructed, emotional, insightful and, yes, often funny and entertaining fantasy about a place that became the site of a dark and tragic event.