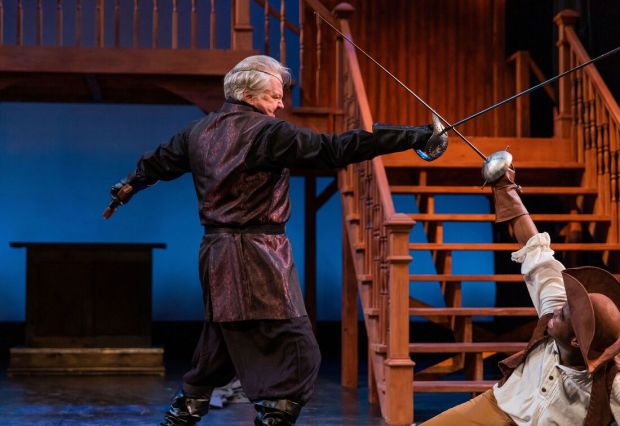 STONEHAM – It is theater’s summer season, and area theaters have taken notice.

For their first collaboration, the newly-established Front Porch Arts Collective and the Greater Boston Stage Company have selected a sure-fire crowd-pleaser in “The Three Musketeers.”

The adaptation by Catherine Bush, based on the novel by Alexandre Dumas, puts the accent on the humor, the swordplay and the high camp aspects of the story, while also requiring  the energetic cast of 16 to play a myriad of roles.

What results is a high-energy, good-hearted romp. Not everyone can be Douglas Fairbanks when it comes to buckling the swash – it takes more than a few weeks of rehearsal to become a competent fencer – but everyone gives it the good college try and some of the cast are quite skilled. Fight director Angie Jepson had a lot on her plate.

From the first moments when Maurice Emmanuel Parent steps on stage and is so gloriously over-the-top as Cardinal Richelieu it becomes apparent that Parent, presumably with the permission of Director Dawn M. Simmons, is going for — and finding — the high camp in the piece.

That will continue throughout, including a moment when Parent as Richelieu breaks down the fourth wall and steps out of character to admonish the audience after it applauded the death of one of his fellow villains: “Oh, stop it!”

When he asks subjects to kiss his ring – usually a sign of respect for a prince of The Church – he is actually asking them to kiss a very different part of his anatomy.

The story around which the orchestrated violence takes place is a classic tale in 17th Century France. A country lad named D’Artagnan (Marc Pierre) has come to Paris to become one of the king’s musketeers.  Pierre cuts a wide swath throughout in the role from the early moments when he runs afoul of the villainous Rochefort, Richelieu’s henchman, played by  J.T. Turner, one of Greater Boston’s finer character actors. They are the best in the cast at the swordplay, and conduct two memorable duels.

After the battle with Rochefort, D’Artagnan finds himself without the introduction penned by his father, which would have given him “street cred” with the commander of the king’s musketeers, Madame de Treville (Tonasia Jones). That forces him to use “alternate means” to identify himself to her, but there are outside forces at work blocking him from joining the musketeers.

Simmons has taken the liberties of casting several of the roles cross-gender, so two of the three musketeers in this telling are females, with  the former seminarian Aramis (Paige Clark) joining the distinguished but hard-drinking Athos (Lyndsay Allyn Cox) and the impetuous, valiant but vain Porthos (James Ricardo Milord).

Certainly courage in battle is not the exclusive province of male gender, and the non-traditional  casting fits into the overall vibe of the piece.

Actor/director Sarah Gazdowicz is Constance Bonacieux,  the queen’s trusted maid who ferries messages between Queen Anne  (Sarah Shin) and the Duke of Buckingham, at great personal risk,. and ends up in the Bastille. She is also D’Artagnan’s love interest.

The villains in the piece are unfirmly strong, with the treacherous and deadly M’Lady de Winter (Margaret Clark) – who figures in a late plot twist — just as dangerous, despicable and cunning as Richelieu and Rochefort.

The triumvirate seek to take down the queen and brand her as an adulterer, forcing the king to take action and opening the way for Richelieu to gain even more power.

Arthur Gomez finds the humor in a foppish Louis XIII and is just as strong in other roles. Stewart Evan Smith is Planchet, Treville’s noble and valiant servant.

The dangers associated with the staged violence became apparent when the actor playing Buckingham was injured and  Hubens “Bobby” Cius took the stage Saturday on very, very short notice playing the role of Buckingham with script in hand.

Despite the body count, which mounts steadily throughout the two-hour production, “The Three Musketeers” is fast, funny, and light-hearted fun.

The Front Porch Arts Collective has partnered with two other area theaters in its first season. As greater Boston’s only professional black and brown arts organization, it is dedicated to combating racism through theater. For more information, go to frontporcharts.org.