No graceful exit for president in ‘Nixon’s Nixon’ 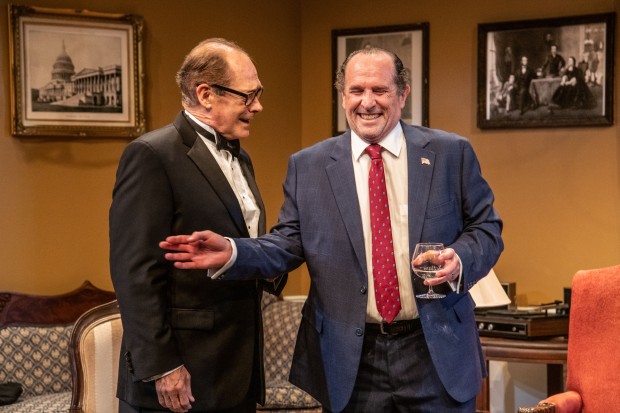 WATERTOWN – The most complicated president in the history of the United States — perhaps until now – built his presidential library in Whittier, Calif., where he grew up in a Quaker home after being born in Yorba Linda, Calif.

Given how Richard M. Nixon thought about himself and the Watergate crisis that brought him down, you might think the library might be a place where the bad and the ugly of his final months might be buried under an array of accomplishment during his two terms.

You would be wrong. The good, the bad and the ugly are all laid out in various exhibits, films, etc, and you are left to ponder the man and his legacy and what it all meant for yourself.

This is by way of introduction to Russell Lees’ political satire “Nixon’s Nixon,” now being performed at the New Repertory Theatre through Oct. 6.

Lees himself was a special guest at a recent performance, and there’s a good chance he was pleased with the treatment his play got from New Rep stalwarts Joel Colodner as Dr. Henry Kissinger and Jeremiah Kissel as President Richard M. Nixon.

It is the night before Nixon’s resignation of the presidency in 1974, and Nixon has summoned Kissinger to the Lincoln Sitting Room in the White House. What they discussed in those final moments of Nixon’s presidency is anyone’s guess, but Lee provides his own take on it, and it is highly entertaining and, in its own way, prophetic.

On the night in question. Lees paints Kissinger as someone with a far different agenda than Nixon’s: How will history treat him and what will be his legacy? And oh, by the way, Mr. President, can you put in a good word for me with Jerry Ford before you leave the stage?

Nobody quite does unhinged like Jerry Kissel – I still remember his 2001 performance in Christopher Durang’s “Betty’s Summer Vacation” —  and his Nixon is a hard-drinking, vein-popping mess, all over the place as he paces the room, ebullient at first and then despondent as he ponders his probable impeachment and conviction if he deigns not to resign.

Nixon is delusional and in denial and incredulous at how it came to all this. “They gave me so much power, why are they surprised I used it?”

Kissinger is loathe to climb into the bottle with Nixon, but he finally does, and, as the Romans would say, in vino veritas (in wine, there is truth), and what follows are recriminations, accusations, secrets spilled, and moments of regret. Nixon wants to know who really spilled the beans on him while Kissinger wants to know what may be on the tapes yet to be discovered that could sink his ship.

While Lees paints a portrait of the soon-to-be disgraced president that isn’t flattering, he also integrates some of the sunnier moments, recalling scenes of the triumphant visit to Mao’s China, something no president before him had accomplished.

Nixon, never one to forget a grudge, recalls his bad treatment as vice-president under Eisenhower, the “Checkers” speech, and his treatment at the hands of John F. Kennedy when Nixon thought he had the election stole from underneath him, and decided not to challenge for the good of the country.

Lees allows things to roam further afield, as Nixon begins to explore unthinkable options to keep himself in power, showing how power and urge to hold on to it can make a person even think the unthinkable.

It is both chilling and funny when Nixon suggests to Kissinger, “We’ve always been good with bombs, Henry.”

Director Elaine Vaan Hogue keeps the two old pros coloring within the lines, and their portraits of the iconic characters stay grounded as events become ever more chaotic.

The duo becomes philosophical as Nixon finally accepts Kissinger’s advice to resign the next day and they turn to gallows humor.

Nixon sees it this way.   “Ambitious people like us, Henry, once we reach our goal, we should just blow our brains out. You don’t know when to kill yourself until it’s too late. By the time you figure it out, the moment has passed.”

← Trinity’s ‘Prince’ is a sublime take on Buddy Cianci
Arlekin’s ‘The Stone’ is weighty, but powerful →