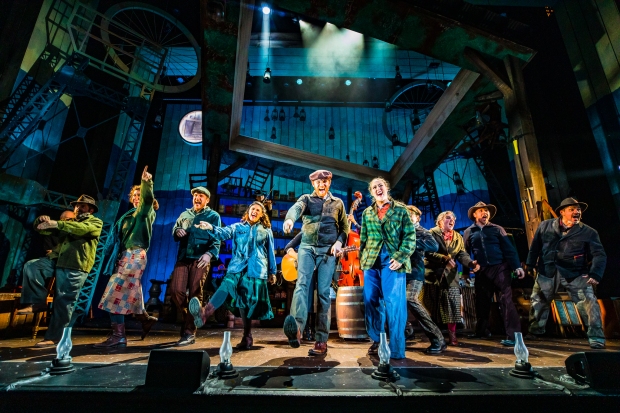 For the world premiere of the adaptation produced by Red Tail Entertainment and Paul T. Couch,  Parton, who wrote the music and lyrics for the show now having its world premiere at the Emerson Colonial Theatre,  herself was on hand to help give the show a big sendoff.

The show has some sublime musical moments, but as theater best serves as a paean to the values and virtues of the  people Parton grew up among in the Smoky Mountains of East Tennessee.

The 73-year-old Parton has been seemingly everywhere in recent months: She was featured in several episodes of Ken Burns’ recent “Country Music,” appeared on the Country Music Awards, and on a  TV special marking her 50 years singing at the Grand Old Opry in Nashville.

This “Christmas Carol” is most effective when the Grand Ole Opry breaks out on the stage of the Emerson Colonial stage.  Music director/keyboardist Tim Hayden leads a tight six-piece band that benefits from some sterling fiddle playing from Caitlin Nicol-Thomas and Mark Barnett’s skill with banjo, mandolin and dobro.

Parton’s music tends to jump-start the show again and again when there is a bit of a lull. There are 13 musical numbers in all, most written for this production and some older songs have been repurposed. Three of the more effective numbers are “Appalachian Snow Fall,” the lovely ballad “Three Candles” and “Circle of Love,”  reprised twice.

The cast is heavily influenced by local talent and folks who learned their craft in and around the Colonial Theatre itself, including Emerson College grads Jonathan Acorn, Josh Bryan, and Julia Getz, and local- based actors Billy Butler, Sachie Capitani, Ray O’Hare, Malachi Smith and Ian Shain.

The adaptation is credited to David H. Bell, Paul T. Couch, Parton’s entertainment director at her Dollywood theme park, and Curt Wollan, with the book by Bell and Wollan directing; the book could use a 10-15 minute shave and haircut, with Act II being the main culprit.

Unfortunately, not everything in the Dickens classic transfers seamlessly into this production.

It  is Christmas Eve 1937, with the Depression still in full swing in the Smoky Mountains of East Tennessee, and Ebenezer Scrooge (Peter Colburn) – climbing over the back of his late partner, Jacob Marley (Billy Butler)  —  owns pretty much everything in the small mining town, including the richly-detailed general store by set designer Scott Davis, which is the scene for much of the action.

He is celebrating Christmas Eve by foreclosing on there poor  homeowners. A blizzard is setting in, setting the stage which follows the basic outline of Dickens’ plot, including an appearance by the long-dead Jacob Marley himself.

Brittney Santoro provides both warmth and depth as Scrooge’s doomed sister Fanny and Sadie, the woman he left behind on the way to riches and loneliness.

Alongside the greed of Ebenezer Scrooge, this tale is stocked with examples of self-sacrifice, such as when Scrooge’s nephew Fred (Jonathan Acorn)  asks his wife to bust up prized piece of furniture so there is wood that can be burned to help a downtrodden neighbor family.

The pace of the piece suffers when the writers try to pack a bit too much into the production.

Parton’s life story, of course, is probably even more compelling than Dickens’ tale. She was raised in the Smoky Mountains as one of 12 children in a family with next to nothing, including  a father who could not read or write. That inspired her to begin a literacy foundation that has given away 100 million books to children around the world. Her other philanthropic ventures are also legendary.

It might seem a curious call to have a “Smoky Mountain Christmas Carol” debut in Boston  instead, of say, Nashville.  But the Ambassador Theatre Group, which has leased the historic theater from Emerson College, is making a strong push to make Boston – and the Colonial – an out-of-town tryout stop for new work.

Add to that the appeal and popularity of Parton herself, which transcends country music; she has sold 100 million records and has scored more No. 1 hits than any other female country artist.

The production values of this “Carol” were solid, with one important exception. At a recent performance some of the performers’ voices faded in and out and there seemed to be a few “dead spots’ on stage. Things improved greatly after intermission

Adaptations are not an easy thing, especially when tinkering with works that move across the ocean and advance in time 100 years.

Again, where “Smoky Mountain Christmas Carol”  shines and works well is as a tribute to the values and virtues of the East Tennessee mountain folk, whom Parton  has never left behind as she became an international superstar.

: Peter Colburn as Ebenezer Scrooge and Mary Tanner as The Ghost of Christmas Past in “A Smoky Mountain Christmas Carol.” Photo Jesse Faatz

← ‘The Wickhams’: Austen’s characters enchant again
This ‘Carol’ will warm you, restore your faith →