This ‘Carol’ will warm you, restore your faith 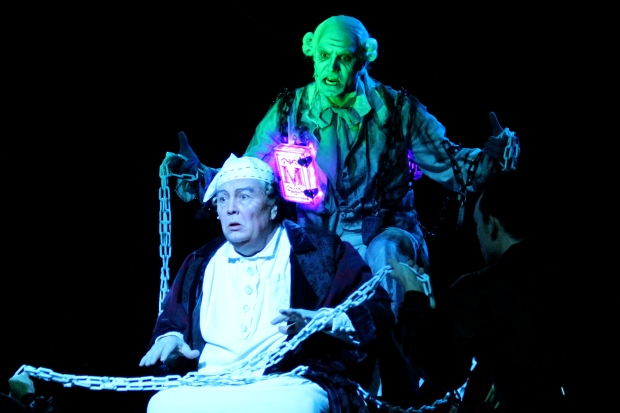 BEVERLY – It is back to warm the cockles of your heart and restore your faith in the goodness of your fellow man.

The North Shore Music Theatre’s 29th edition of its adaptation of Charles Dickens’ “A Christmas Carol” is onstage again, a dynasty longer than that of the New England Patriots.

The adaptation of the classic tale, written by former NSMT Artistic Director and Executive Producer Jon Kimbell and colleagues David James and David Zoffoli, was first presented in 1989, and has been presented every year since with two exceptions.

The first was a disastrous run of “High School Musical II”  in 2008, with the theater closing the following June, and 2009, when the theater was closed and the Kimbell adaptation moved  to the Seacoast Rep in Portsmouth, N.H..

It was there where current NSMT Owner/Producer Bill Hanney, who had just purchased the theater, saw the show and made bringing it back to Beverly in 2010 with David Coffee starring one of his priorities.

Now , for the 26th time, Texan Coffee is playing the role of Ebenezer Scrooge. His long run in the role  has allowed  Coffee to do all the little things: A pause  here, added emphasis on a word, a turn of phrase here, all refining and adding to what has gone on before.

A friend with a strong background in theater and attending the show for the first time said he marveled at Coffee’s reactions to that is going around him, and through the years he has made that just as important as the delivery of his own lines.

At a recent performance Coffee gets his customary round of applause upon entrance, but he and his colleagues also heard  other ovations after his encounter his with the gentlemen callers (Peter S. Adams and J.T. Turner) who come soliciting donations, his tete-a-tete with his well-meaning  nephew Fred (Andy Tighe), and his first go-round with Cheryl McMahon – also celebrating her 26th time as a member of the cast – as Mrs. Dilber, his beleaguered housekeeper.

There are other longstanding cast members  who have helped the production become an iconic holiday tradition, including Russell Garrett who captures perfectly the warmth of Bob Cratchit and who is in perfect sync with Coffee in their scenes, , and Leigh Barrett, who was in the first NSMT production of “Carol” in 1989 and has returned many times since, with her magnificent vocal instrument, as The Ghost of Christmas Past and Mrs. Cratchit.

Barrett’s Act II  performance of the lovely ballad “The Little Child,”  with lyrics by the aforementioned Kimbell, was inspired by a traditional Austrian lullaby, “Still, Still, Still.” It comes at a particularly poignant time in the production and if it doesn’t bring a tear to your eye, check your pulse.

Under the direction of Kevin P. Hill, NSMT’s artistic director who also handles the choreography, this “Carol” has been tweaked but the essential elements are intact. It remains a sprightly, colorful  affair  with myriad special effects — yes, Jacob Marley (Alex Puette) will fly and scare the daylights out of you — and there are pyrotechnics and vivid projections  by Elizabeth Dombek that add immeasurably to the “musical ghost story” aspect of the adaptation.

Then you have the grace and precision of the choreography by Hill, and the lovely music, a combination of traditional carols and original music composed for the piece by Alby Potts and James Woodland an performed by musicians positioned around the theater under the direction of Robert L. Rucinski.

Kimbell’s adaptation introduces a narrator (Tommy Labanaris) who has a secret you may guess before the finale.

Dale Elston and Drew Forsett are the energetic, acrobatic Pearlies, dancing spirits modeled on London’s street buskers who are prominent throughout the piece.

The area’s young talent pool is well-represented by Emilia Tagliani as Martha Cratchit, Asher Navisky as Peter Cratchit, Grace Olah as Belinda Cratchit, and Jack Baumrind as Tiny Tim, and Ciaran Mohan and Dylan Prime as a air of rambunctious London boys.

And, of course, the piece de resistance are the scenes  in the aftermath of the spirits,  with a transformed Scrooge and a  bewildered Dilber  They have been honed and improvised  and they are – and have been – the highlight of the show for quite a while now.

The last 15 minutes of the piece – Scrooge’s joyous transformation from th  miserable miser to Father Christmas – have become a sublime pleasure.

Coffee has refined his level of giddiness, such as the delightful cackle as he prepares to raise poor Bob Cratchit’s salary.

This Christmas, in the spirit of the season, do yourself and your friend Scrooge a solid and reach out to someone for whom Christmas may not be — because of money, health or family issues – a happy time. Let them know you are thinking of them, and help if possible.

Hanney, who has been the “founder of the feast” since he re-opened the theater in 2010, has  called it “a privilege” to produce  the show. “It is always an honor to produce a show that means so much to so many people,” he said.

Three  decades in, “A Christmas Carol” is still the brightest bulb on the tree, a chestnut roasting on an open fire as Jack Frost nips at your nose. 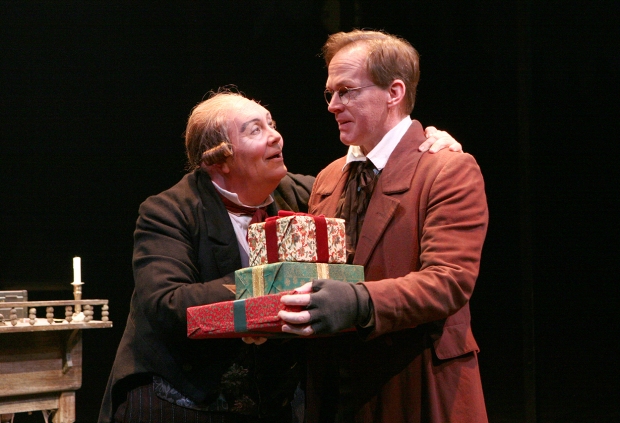