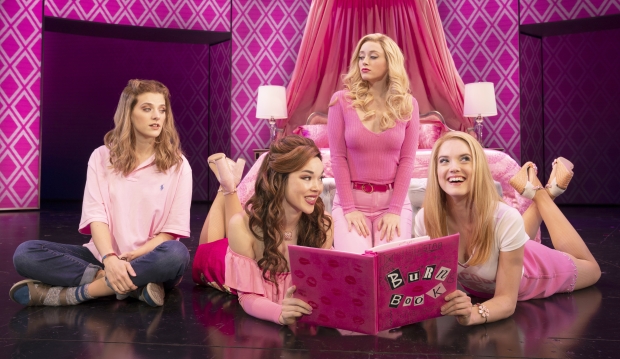 BOSTON – At a fictional high school, the top dog is a cruel blonde who is pretty in pink. But, as Shakespeare reminds us, uneasy lies the head that wears the crown.

In the national touring production  of the musical “Mean Girls” now at the Citizens Bank Opera House, the girl at the top – the “apex predator,” as character Regina George sings about herself  — is just as subject to the fickleness of high school popularity.

One misstep – or some well-placed gossip on social media – and she may soon find herself looking up at the social outcasts, math nerds and other ne’er-do-wells who populate the lower strata of high school life. Such are the vagaries of high school popularity.

The musical  “Mean Girls,” opened on Broadway in April 2018,  and included  some of the classic lines that  creator Tina Fey made famous in the 2004 film of the same name.

At a recent performance at the Citizens Bank Opera House, the show’s target demographic — young women, many with their mothers — dominated the audience, and found their turbulent high school years portrayed on stage thoughtfully – and hilariously.

Cady Heron (Danielle Wade) has grown up in Kenya among the wild animals, home-schooled,  until her mother’s work brings the family back to the U.S.,  where Cady  hopes to come out of Africa and be “socialized” at upscale North Shore High School. 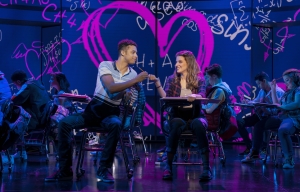 She is greeted there by two social outcasts – winningly portrayed by Damian Hubbard (Eric Huffman) and Janis Sarkisian (Mary Kate Morrissey), who take the fish-out-of-water Cady under their wing. Fey made them the narrators when she remade the movie into the musical, and the duo open the show with “A Cautionary Tale”  for incoming freshmen.

Cady’s character is, of course, the stand-in-in for Fey herself, and Wade is a fine singer with a strong resemblance to Fey, a trait she shares with math teacher Ms. Nodbury (Gaelyn Gilliand); Fey played Ms. Nodbury in the movie version.

Looming above all the students are the Plastics –  a trio of girls who include an alpha female, Regina George (Mariah Rose Faith); Gretchen Wieners (Megan Masako Haley), keeper of the group’s secrets and an insecure lapdog for Regina;  and Karen Smith (Jonalyn Saxer), the gorgeous but clueless quintessential  dumb blonde.

Regina exists only to keep all others under her heel. The Plastics invite Cady to a much-desired seat at  their lunch table and advise her on the fashion “do’s and don’t’s” that they pass down like The Ten Commandments.

But when Cady happens to become enamored of her calculus classmate Aaron Samuels (Adante Carter), one of Regina’s many discards, the fix is in and Cady is soon to be banished from the kingdom.

While Fey’s treatment of her film centers on the fickle nature of high school popularity and the harm from cliques that form in its wake, it also asks teens to play nice with  tech geeks and nerds, not to flunk math in hopes of landing a boy, and not to sell yourself for that coveted seat at the Plastics’ lunch table. And she also has a lot to say about the power of social media and its effect on young girls. But Fey cloaks all of it in saucy, smart humor, delivered just as smartly and sassily by a fine cast.

She has infused the book of the musical with classic lines from her screenplay, including this one delivered by the aforementioned Gilliand as Mrs. Heron: “I’m not like a regular mom, I’m a cool mom.”

While Fey’s book leads the way, the score by her husband Jeff Richmond and the lyricist Nell Benjamin lags a bit behind. It does its job in advancing the narrative and indeed there are many clever moments, but there is no one shining moment, a show-stopper, a song that becomes the face of the show.

There are a few numbers that rise above the others, such as “Where do You Belong?” as Damian and Janis help Cady navigate the various cliques, groups and activities in the school to find out where she feels most at home.

Then there’s the poignant “What’s Wrong With Me?,” sung by Haley as Gretchen, echoing the sentiments of just about every teenage girl ever, “I’d Rather Be Me,” Janis’ ode to being different, and  Cady’s anthem “Fearless.”

Besides Fey’s book, what lifts “Mean Girls” from the mundane is  energetic direction and choreography by Casey Nickolaw, a Tony winner for “Book of Mormon” and nominee for several other musicals, whose work is the catalyst for some fine production numbers, where a diverse crew of dancers of every size and shape strut their stuff.

In this age of digital HD projections, productions are increasingly moving away from the idea of bulky, blocky, sets. Instead, the video design of this production allows the action to move instantaneously across time and space, in this case from the plains of Kenya to the entrance of an upscale Chicagoland High School.

There was little chance “Mean Girls” would fail given the iconic status of the movie and Fey’s involvement. The good news is that it delivers on its promise, with positive, life-affirming messages cloaked in laughs that never stop, choreography that pops and a cast that’s all in on director Nickolaw’s vision. 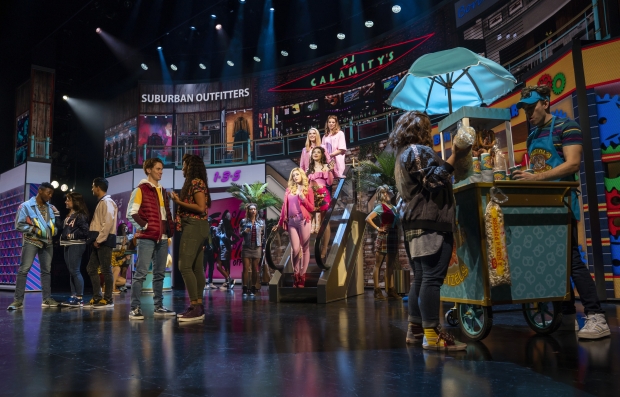