in ART’s ‘Gloria,’ Steinem tells her own story

The cast of Gloria: A Life. Photo: ©APrioriPhotography.com

CAMBRIDGE – Plays about cultural icons are that much more fun when the cultural icon in question is in the audience to see her life being played out on stage — and then sticks around afterwards to talk about it, answer questions and hear stories.

That was the case for those lucky enough to attend the official opening night of “Gloria: A Life” at the Loeb Drama Center, produced by the American Repertory Theater in association with the McCarter Theatre Center and Darryl Roth.

Gloria Steinem’s story as told by playwright Emily Mann played out in Act I of the production, a fast-moving, well-told chronicle of the life and times of the pioneering feminist activist, journalist, author and publisher of the groundbreaking Ms. Magazine.

Then Steinem herself left her seat to participate in a 45-minute “talking circle,” a Native American concept  that served as Act II, and a tool that ART Artistic Director Diane Paulus has used in the past, most notably in Anna Deveare Smith’s “Notes From the Field: Doing Time in Education.”

Both acts were equally engaging. For this production, the performing area was set in the center of the theater, adorned with Persian rugs and comfy cushions where both actors and theater-goers were seated, with the audience on opposite sides.

The set-up allows the “talking circle” to be part of each performance, with Kalember introducing herself and inviting the audience to stay before introducing a special guest, in this case Steinem herself. Other performances will feature notable activist or academics. 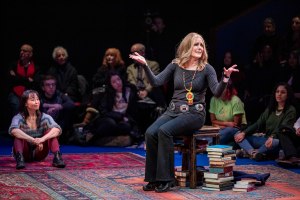 Playwright Mann used Steinem’s autobiography “My Life on the Road,” as a source material when constructing the 95-minute Act I, a multimedia experience greatly enhanced by Elaine J. McCarthy’s projection design. It played out on screens on both sides of the theater and helped us  recall important people and events, including President Richard Nixon profanely invoking Steinem’s name or Harry Reasoner in 1972 predicting Ms. Magazine would last “about six months.”

The play was initially seen by Mann as a one-woman show but Paulus, who worked on it for years with Mann, may have persuaded her to re-fashion it as the ensemble piece it is today.

Patricia Kalember’s performance as Steinem was warm and winning but not a pure imitation, except when it came to such things as dress and hair style. She wore the trademark aviator glasses and black bell-bottoms and the resemblance was remarkable when both women took the stage.

Kalember is our guide along the way as we move from Steinem’s early days when she was sent to the back of the bus as a journalist and relegated to the “women’s pages.”

Along the way Mann and Steinem pay tribute  to the many others who fought the good fight alongside her,  including the many African-American women whom she encountered during the battle for women’s rights, pioneers such as Flo Kennedy and Dorothy Pitman Hughes, who co-founded Ms. Magazine with Steinem.

“Gloria: A Life,” moves swiftly, surely and confidently, thanks to an all-female ensemble of seven actresses, who portray both the men and women who are part of her story. It includes Johanna Glushak, Gabrielle Beckford, Patrena Murray, Erika Stone, Brenda Withers and Eunice Wong.

Two of the best supporting turns are by Glushak. She brings back to life the incomparable, indefatigable Bella Abzug, the legendary New York City Congresswoman, complete with bullhorn and trademark wide-brimmed hat, part of a movement that could not, would not be ignored.

Glushak also portrays Gloria’s mother Ruth, who gave up her job as a journalist after a marriage that resulted in a “nervous breakdown” and fell into a drug-induced haze that would last the rest of her life.

Both the hills and the valleys are recorded, including the sadness of a happy marriage late in life to Englishman David Bale, the father of actor Christian Bale, in 2000 lasting only three years until his death in 2003. Steinem’s own abortion was also part of the narrative.

Kalember as Steinem can only shake her head and say “You can’t make this stuff up” when talking about a list of those testifying about an abortion bill, a list that featured “14 men …, and a nun.”  She also noted wryly – as others have in the past — “if men could have children, abortion would be a sacrament.”

When Steinem took the stage herself, she quipped, “One of the bravest things I’ve ever done is follow myself.”

She was warm and empathetic as she took questions, comments and observations from the audience for about 45 minutes, dispensing wisdom, friendly advice and listening intently as audience members raised issues or told personal stories. It was unscripted theater at its best.

Steinem has never been shy about mixing it up with those who disagree with her and urged the female audience members to engage and “educate” others.

The writer, journalist, editor and full-time champion for women’s rights may be 85, but she is still fighting so the gains that have been made don’t fall victim to today’s political climate. And the fight, she reminds us, belongs to members of every generation..

“Gloria: A Life.” Written by Emily Mann. Directed by Diane Paulus. Presented by American Repertory Theater in association with the McCarter Theatre Center and Darryl Roth. At the Loeb Drama Center, Cambridge, through March 1. americanrepertorytheater.org