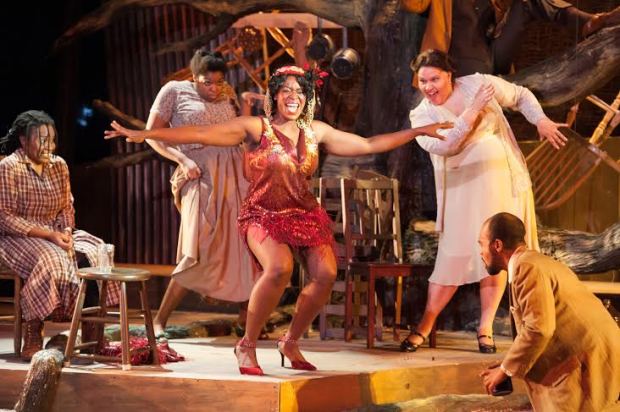 Crystin Gilmore (center) as Shug Avery with (from left) Lovely Hoffman, Taylor Washington, Carolyn Saxon, and Maurice Emmanuel Parent in a scene from the SpeakEasy Stage Company production of THE COLOR PURPLE, running now through February 8th at the Calderwood Pavilion at the Boston Center for the Arts, 527 Tremont Street in Boston’s South End.  Tix/Info:  617-933-8600 or www.SpeakEasyStage.com .  Photo:  Glenn Perry Photography.

BOSTON — In recent decades, the musical theater genre has taken us to places that those who pioneered the art form could never imagine.

A mass murderer into cannibalism and profiles of other notorious  killers of famous people? “Sweeney Todd” and “Assassins,” check and check.

So why not Alice Walker’s 1983 novel about the plight of black women in the South after the Civil War and continuing into the early 20th Century, when the women were subject not only to the discrimination and abuse from whites, but abuse from Afrcain-American men as well, who often treated them as property to be bought and sold.

The libretto of the musical version of “The Color Purple” by Marsha Norman struggles to encompass all the events portrayed in the Walker book and the iconic 1985 motion picture that starred Whoopi Goldberg, Oprah Winfrey and Danny Glover, but wisely chooses to focus on the events in Georgia and put the African-set subplot in the background.

Some of the sexual aspects of the story have been suggested more than portrayed, perhaps in a bid to make the musical more of a family work.

The music and lyrics by Brenda Russell, Allee Willis, and Stephen Bray often convey the spirit iof a revival meeting, and in the faster-paced numbers a chorus of “Amens” rang out from the audience. 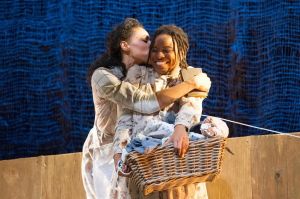 From left:  Aubin Wise as Nettie and Lovely Hoffman as Celie in a scene from the SpeakEasy Stage Company production of THE COLOR PURPLE. Photo: Glenn PerryPhotography.

Boston College graduate and Roxbury native Lovely Hoffman is a revelation as Celie, a most difficult and demanding role. She is 14 as the show opens in 1909 rural Georgia, where she has already been impregnated once by the man she believes to be her father , who promptly took her child away to an undisclosed destination. She becomes pregnant again, and again her child disappears.

She has been beaten down to nothing when she is sent off against her will to live with a man she knows only as Mister (Maurice Emmanuel Parent), later revealed to be Albert.

Parent has shown a consistent level of excellence across a broad range of characters, in productions as diverse as “ The Mother**** in the Hat” to Shakespeare to here as Mister, the abusive husband who calls Celie “ugly” and pursues younger sister Nettie, who won’t have him.

“Purple” benefits greatly from several supporting performances including Aubin Wise as Celie’s sister Nettie, Jared Dixon as Harpo, Mister’s son who also abuses his wife Sofia, with a spirited performance by Valerie Houston as Sophia, a woman who refuses to bow under the abuse from Harpo, retains her dignity and finds the strength to withstand a brutal beating.

Both Wise and Dixon were very good in the Fiddlehead Theatre Company’s recent production of “A Little Princess.”

Crystin Gilmore is a sensuous, sexy delight as Shug Avery, the good-hearted and irresistibly attractive woman who teaches Celie not only how to love, but the heartbreak that can follow. Mister and Celie end up sharing just one thing: their love of Shug Avery.

Walker and Norman haven’t exactly drawn her male characters same palette of emotions as her female characters, except for Mister, who finds late in life the error of his ways and is given a chance for redemption.

Celie’s story is one of faith lost and then found again in her harrowing journey to self-respect.

As it has grown, Speakeasy Stage has gradually ratcheted up the size and scope of its musical productions through the years, from smaller shows such “Bat Boy” “A Man of No Importance,” and “Caroline, or Change,” to larger shows such as the more recent “Bloody, Bloody Andrew Jackson.” and “In The Heights.”

With a cast of 20, “The Color Purple” is one of the largest and most ambitious musical productions it has staged, and staging it in the larger Wimberly Theatre instead of the Roberts Studio Theatre gives the show a chance to stretch its legs and more people to see it.

The common denominator is that the shows are well-done, and Director Paul Daigneault’s talented cast reflects the depth of talent that is to be found in the African-American acting community in the area.

While the darkness early in the production threatens to envelop all, “The Color Purple” is the color of love and its ability to transform and reclaim and redeem lives.

Ultimately, this Speakeasy production is both powerful and uplifting.

“The Color Purple.“ Book By Marsha Norman. Music and lyrics by Brenda Russell, Allee Willis, and Stephen Bray. Directed by Paul Daigneault. Musical direction by Nicholas James Connell. Choreography by Christian Bufford. Produced by the SpeakEasy Stage Company, at the Calderwood Pavilion of the Boston Center for the Arts, 527 Tremont Street, Boston. Through February 8.