NSMT’s ‘Chicago’: Murder was never this much fun 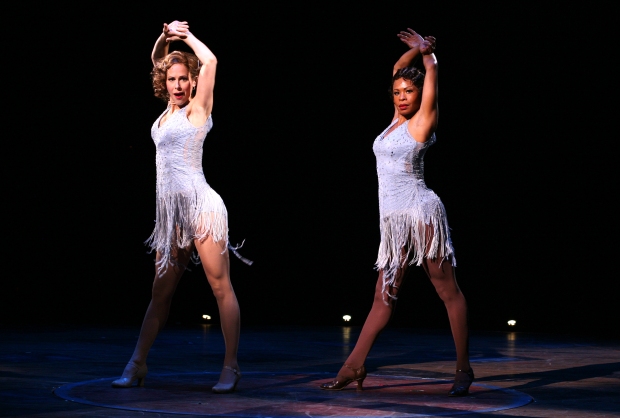 BEVERLY — Who says you can’t teach an old show new tricks?
The musical “Chicago” has been around since 1975, but was just a modest success in its initial run on Broadway. It wasn’t until a 1996 revival that it really caught fire, and it still runs today, making it the longest-running revival in Broadway history.
Director/choreographer Nick Kenkel promised that his new production at the North Shore Music Theatre would pay homage to the iconic choreography of Bob Fosse, but Kenkel would put his own stamp on it, just as he did the choreography for his hit production of “Legally Blonde” at NSMT in 2011. 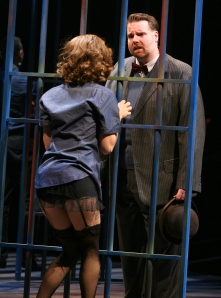 He’s delivered again. His current production of “Chicago”  is sleek, sexy, smart, and the dancing — and Kenkel’s choreography — is as good as in any production I’ve seen of the show, and that goes back to the first national tour that starred the late Jerry Orbach. As he did for “Legally Blonde,” Kenkel has also assembled a cadre of  sleek, sexy, well-sculpted dancers.
Kenkel  made his chops in directing the hit show “Peepshow” in Las Vegas and has also turned many heads with his direction of the “Broadway Bares” burlesque show, which has raised $2.8 million the past two years for Broadway Cares/Equity Fights AIDS.
The “Chicago” of the title takes place in the Roaring Twenties, an era when being charged with murder could be a good career move.
The musical is based on the satirical play “Chicago” by Chicago Times reporter Maurine Dallas Watkins, who covered two sensational murder trials involving beautiful young female defendants, both of whom were acquitted.
Ebb and Fosse wrote the book, which is as cynical and satirical as the play it’s based on.
The good news is that this production happens to be as well-acted as it is danced.
Heather Parcells leads the way as Roxy Hart, the woman with the wandering eye whose legs go on seemingly forever. Parcells is a strong singer as well as dancer, and she shows a deft comedic touch, especially in her scenes with Sean McDermott as Billy Flynn.
Bahiyah Hibah is a veteran of many Broadway shows and the Alvin Ailey dance troupe so it’s a given she’d be able to handle anything Kenkel threw at her dance-wise as Velma, the murderess who’s headed to an acquittal and a career in vaudeville until Roxie becomes the Next Big Thing in the tabloids.
McDermott as Billy Flynn exudes the humor and the hubris of a defense attorney who doesn’t see innocence or guilt, just the number of zeroes at the end of the check, has no morals and will do anything to win.
Liz McCartney is fine as Matron “Mama” Morton, who’s your good friend as long as you have money to spend and your name is in the tabloids, and C. Simmons is in fine voice as the bleeding-heart columnist Mary Sunshine.
And while the choreography still bears the brand of the late great Bob Fosse, Kenkel promised beforehand he would put his own stamp on the show and that he has. There are several numbers Kenkel has substantially restaged, including “Cell Block Tango” with dancing prison guards who interact with the audience, and “Cellophane Man” where Kenkel has added some shadow choreography where there was none, in support of the signature song for the a long-suffering slob of a husband Amos Hart (Nick Cohn).

The chaotic courtroom scene in the second act when Roxie is tried — and then ignored — as the New Big Thing comes along is a hoot.

Paula Peaseley-Ninestein’s costumes are dead-on. The orchestra led by Dale Rieling nails the jazz-infused John Kander-Fred Ebb score, which like the musical itself took a while to catch on but eventually became recognized as one of the duo’s best, with
“All That Jazz,” “Mr. Cellophane” and “Razzle Dazzle.”
It may be murder most foul, but it’s never been more fun than it is in this “Chicago.”
The North Shore Music Theatre production of “Chicago.” Music and lyrics by John Kander and Fred Ebb, book by Ebb and Bob Fosse, based on the play by Maurine Dallas Watkins. Directed and choreographed by Nick Kenkel. Through Oct. 5. http://www.nsmt.org.