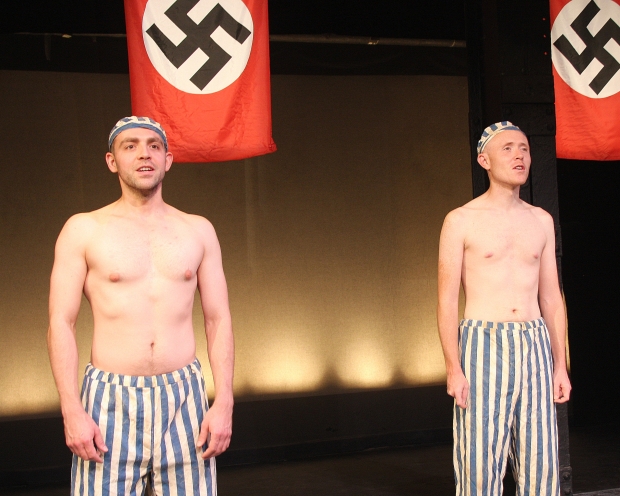 BOSTON — There’s a TV commercial for a purveyor of deli products that likes to tout its products as rising above the others, and that consumers shouldn’t just consider the price. The punch line: “Compromise elsewhere.”

David J. Miller, the producing artistic director of the award-winning Zeitgeist Theatre, doesn’t believe in picking plays because of their pop culture appeal, or just to sell a few more seats.
He tends towards challenging, complicated, powerful plays, the kinds of works that may not be everyone’s cup of tea — and may in many cases not be easy to sit through — but are ultimately rewarding and enriching.
That would be the case with Zeitgeist’s latest production, Martin Sherman’s “Bent,” now at the Plaza Theatre at the Boston Center for the Arts on Tremont Street.
This is the first professional production of the 35-year-old piece in Boston in more than 30 years, and it’s important because it raised the awareness of the persecution of gays during Hitler’s murderous regime.
“Bent” opens on The Night of the Long Knives in July 1934, when life changed forever for gays in Germany, and especially for those living what was up until then free-wheeling lifestyles in the city of Berlin, with its decadent cabaret scene of the 1930’s, portrayed by author Christopher Isherwood, whose stories became the basis for the musical “Cabaret.”
Victor L. Shopov, who has been along for much of the ride as Miller has steadily raised Zeitgeist’s profile, sets the intense tone for the entire cast as Max, a gay man who is also a “Good Time Charlie,” an estranged member of a well-off family who has immersed himself in the aforementioned freewheeling lifestyle of Berlin in the `1930’s. 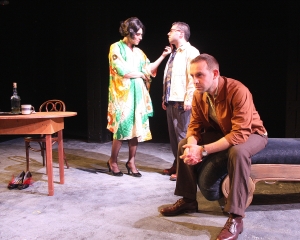 Mikey DiLoreto, winner of a 2013 IRNE Award for his role in Zeitgeist’s “The Normal Heart,” is up to the task as Max’s long-suffering, vulnerable partner Rudy, a dancer whose heart belongs to Max, who frequently steps on it during his many dalliances.
One night, Max brings home a young man named Wolf (Diego Buscaglia), and the encounter turns deadly when Nazi officers show up the next morning looking for Wolf,  a member of Hitler’s Brownshirts and the boyfriend of a Nazi official caught up in the purge. Suddenly, they are wanted men on the run.
They get some help from Greta (Ben Lewin), a cross-dressing cabaret artist whose songs sprinkled throughout the piece serve as guideposts.
Max and Rudy decide to flee Berlin, and Max later turns down help from a family member when he finds out the offer doesn’t include Rudy. Even while hiding in a tent in the forest, they are found and captured and then find themselves on a train transporting prisoners to the notorious Dachau prison camp.
Max believes that his stay in the infamous prison will someday end, and he vows to  stay alive at whatever the cost, even if it mean disavowing his love for Rudy.
He meets a gay prisoner on the train named Horst (Brooke Reeves), who explains that the pink triangle for gays makes them the lowest form of life in the prison, and Max seizes upon it to transform himself into a Jew, instead of a gay.
That will include a sadistic, torturous test of his “manhood” that will determine if he is allowed to wear the yellow Jewish star instead of the pink triangle of homosexuality. It’s an unsettling scene in a series of them.
For about the entire length of Act II — 65 minutes or so — Shopov and Reeves will ferry rocks back and forth across the prison yard, a mind-numbing, strength-sapping make-work tasks designed to kill them slowly but effectively.
But both have an unyielding will to keep their sanity, their humanity and indeed their ability to love — even amidst the worst horrors the Nazis can visit on them.
The second act is a physical and metal test for the actors — and the audience — as both Max and Horst struggle to hold onto life.
Max — who has made a life of making “deals,” usually for the benefit of Max — finds himself making deals for his lover, Horst.
Even in the midst of depths and despair, Max will have to answer a question that he himself raised by taking the Jewish star: who is he really?
The searing intensity never lets up, right up to the shocking climax. Strap yourself in for a terrifying, if rewarding ride.
The Zeitgeist Theatre Company production of Martin Sherman’s “Bent.” Directed by David J. Miller. Set, David J. Miller. Costumes, Tyler Kinney. Lights, Michael Clark Wonson. Sound, J. Jumbelic. At: Plaza Theatre, Boston Center for the Arts, through Oct. 11 Tickets: $20-$35, 617-933-8600, http://www.zeitgeiststage.com