Members of the cast of the Stoneham Theatre’s “MEET ME IN ST. LOUIS. ” Photo credit Mark S. Howard

STONEHAM — It’s fun to watch an actor or actress grow as a performer.

I give you Sirena Abalian , 18, a senior at Lexington High who has been acting since the age of 6.
Along the way, she has garnered four IRNE nominations in the category of Most Promising Performance by a Child Actor and won twice, with each production becoming ever more polished as a singer, actress and dancer.
As young as she still is, she can still headline a production, even when she is at the fore of a very strong cast as she is in the Stoneham Theatre’s warm, winning production of “Meet Me in St. Louis,” the stage version of the classic 1944 movie musical that starred Judy Garland and was directed by Vincente Minelli, who later became Garland’s husband.
It’s the story of the lives and loves, ups and downs of the Smith family of St. Louis at the turn of the 20th Century, set against the backdrop of the imminent 1904 Louisiana Purchase Exposition World’s Fair.
Smith family is encountering typical middle class problems and changes until a possible move to New York City threatens to uproot the family and send everyone into a tailspin.
The headline role of Esther Smith is performed by the aforementioned Abalian, and when she launches into the opening notes of “The Boy Next Door,” you can close your eyes and it’s remarkable how much she sounds like the young Judy Garland.
I realize a comparison to the iconic Garland voice is a lot to put on a young performer’s plate, but there it is. Abalian not only sings with feeling and easy grace, she has the stage presence and acting skills to have us rooting for her as she woos that boy next door.
But it’s not as if Abalian is carrying the ball by herself. Not with solid supporting performances by the ever-reliable Robert Saoud as the Smith family patriarch, Attorney Alonso Smith; Susan S. McGinnis as stolid wife and mother Anna; William Gardiner, who projects warmth and good humor in almost he does, including the Stoneham productions of “Lumberjacks in Love,” “Nutcracker the Musical,” and “Miracle on 34th Street,” as the mischievous, fun-loving Grandpa Prophater, and Liliane Klein, who gets to show off comic and singing chops as the good-hearted Irish-American maid Katie. 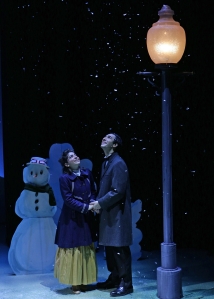 “St. Louis” is also a Showcase for some promising young actors, including Emerson College graduates Gigi Watson as Rose Smith and Daniel Irwin as Lon Smith, Emerson College students Felix Teich as John Truitt and Tara Feeley as Lucille Ballard. Two cuter-than-cute kids, Chloe Nason as Tootie and Natalie Hall as Agnes, emerged as professional scene-stealers of the first degree, especially in Tootie’s “Drunk Song” and “Waltz Me Around Again Willy” with Abalian as Esther.
Much of the plot concerns the efforts of the Smith girls to snag a husband: Rose is waiting for a stumbling Warren Sheffield (Ryan O’Connor) to get around to popping the question while Esther is in hot pursuit of Truitt, the boy next door.
The score has some strong songs beyond those four most identified with the show: “Meet Me in St. Louis,” “The Trolley Song,” “The Boy Next Door,” and the iconic “Have Yourself a Merry Little Christmas,” lovingly sung by Esther to a distressed Tootie.
“You’ll Hear a Bell,” “Over the Bannister” and “You Are for Loving” are fine numbers in their own right.
Ceit Zweil’s choreography enlivens production numbers such as “Skip to my Lou” and “The Banjo.”
Megan F. Kinneen’s streetside set opens up to reveal the well-detailed home inside at 5135 Kensington St.
While “St. Louis” is indeed a family-friendly production, it isn’t really for very young kids. It may not move quite quickly enough for them and lacks an appearance from a holiday icon such as Santa or Rudolph to really hold their attention.
Stoneham Associate Artistic Director Caitlin Lowans directed the production, and she mines the homespun humor of Hugh Wheeler’s book and the charms of the cast to provide an entertaining, oft-moving piece of holiday entertainment that will work all of the humbugs out of you by the end of the show.
The Stoneham Theatre production of “Meet Me in St. Louis.” Book by Hugh Wheeler, Songs by Hugh Martin and Ralph Blaine. Based on “The Kensington Stories” by Sally Benson and the MGM motion picture “Meet Me in St. Louis.” Directed by Caitlin Lowans. Musical direction by Bethany Aiken. Choreography by Ceit Zweil. Scenic design by Megan F. Kinneen Costume design by Tyler Kinney. Lighting design by Christopher Ostrom. Sound design by John Stone. Through Dec. 28 at the Stoneham Theatre. http://www.stonehamtheatre.org