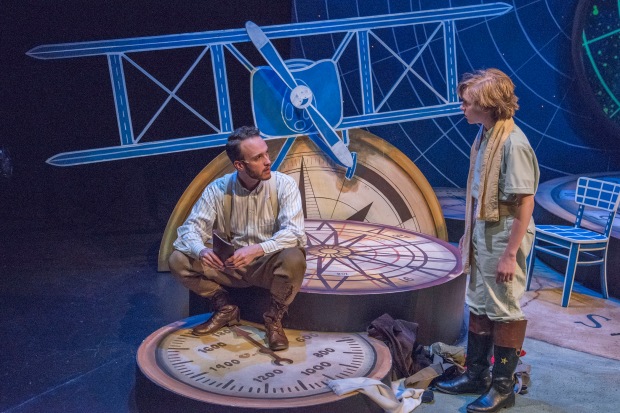 WATERTOWN — I always thought “The Little Prince” spoke to adults more than children, and although I read it to my kids, I never knew what they understood and captured from it.
The novella “The Little Prince,” with its iconic line drawings became a worldwide best-seller for the Frenchman Antoine de Saint-Exupery, who died in 1944 during World War II on a reconnaissance flight for the Allies, before his book even had a chance to be published in France.
The character of The Aviator is believed to be largely based on his own experiences as an ace pilot during World War I and then as an air-mail pilot for Aeropostale, daring to undertake dangerous new routes, much like The Aviator in the book.
The book touches a lot of genres: fantasy, a bit of science fiction, with a generous dose of whimsy, and humor to be sure.
This musical adaptation of “The Little Prince” at the New Repertory Theatre includes music by Rick Cummins with lyrics and book by John Scoullar. They have handled Saint Exupery’s work with obvious affection and care, and a quartet of fine actors give strong performances, but the spareness of the book undergoes some padding and stretching and that, combined with the tepid score, makes it sluggish at times.
Nick Sulfaro is our narrator of the piece as The Aviator, the airmail pilot forced to land his plane in a Saharan Desert, a thousand miles from help with little food or water.

One day he suddenly finds himself the company of a mysterious young man (The Little Prince, Wil Moser) who doesn’t want to answer any questions.
He is from a small planet he calls Asteroid 325 but that people on Earth call Asteroid B-612. He took great care of this planet, preventing any bad seeds from growing and making sure it was never overrun by baobab trees, but when The Rose (Laura Jo Trexler) he has nurtured, cultivated and protected lies to him, he decides to leave and visit other planets.
Moser, a slight, youthful-looking, 15-year-old high school freshman at Barnstable High, has a strong, pure voice and gives the character of “The Little Prince” strength and clarity.
Andrew Barbato is given a free rein to show to stretch his legs playing a variety of roles, including the very different “men of the planets” — the King, the Conceited Man, the Businessman, the Lamplighter and the Geographer, all of whom live alone on their own respective planets — all to hilarious effect.
Barbato as The King “commands” The Little Prince, becomes a self-possessed businessman, and The Lamplighter, frenetically lighting and dousing his light.
He later is a wizened, wily Fox, looking to break out of his rut of being chased by hunters and in turn chasing chickens
“Guns and chickens. That’s all they know,” the Fox mutters at one point in his disdain for humans in general and hunters in particular.
Saint-Exupery chooses the character to deliver an important point: “It is only with the heart that one can see rightly; what is essential is invisible to the eye.”
“The Little Prince” is lovely to look at, with rich production values. Matthew Lazure’s most interesting set design is a series of compasses, clocks and instrument dials that form about a dozen platforms that have various uses during the production. Chelsea Kerl’s colorful costumes, evocative lighting by Karen Perlow, and Michael Policare’s sound design all add to the overall effect.
The score by is a bit unbalanced and front-loaded — 12 numbers in the first act, four the second — and although there is sterling musical direction by the estimable Todd Gordon, assisted by Mike Jacobs and Jeri Sykes on reeds, the score struggle to lift up the piece and move it forward.
The lightness of the book eventually becomes a little heavy-handed in its message. Still, the actors are all fully-invested in the piece, as is director and choreographer Ilyse Robbins.
“The Little Prince” has its moments, but too few of them are musical ones, and if that is the goal, you‘ve fallen short.
The New Repertory Theatre production of “The Little Prince.” Music by Rick Cummins, book and lyrics by John Scoullar, based on the book by Antoine de Saint-Exupery. Directed and choreographed by Ilyse Robbins. At the Mosesian Theatre through Dec. 21.
http://www.newrep.org.