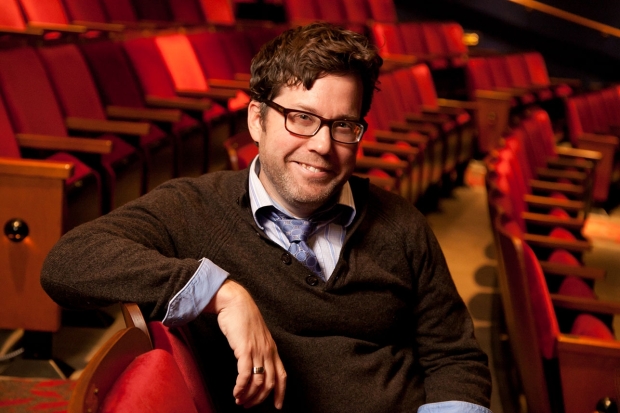 Sean Daniels has been named the new executive director of the Merrimack Repertory Theatre.

Lowell, MA – Merrimack Repertory Theatre (MRT) is excited to announce the hiring of Sean Daniels as the company’s next Artistic Director. An accomplished director and creator of new work, Daniels was most recently the Artist-At-Large at the Geva Theatre Center in Rochester, New York, where he has received national attention for a program designed to better engage audience members with the work on stage. He will take over the reins of MRT from Charles Towers, who led the company for 14 years and firmly established the company’s reputation for producing high quality, compelling new plays and regional premieres.

Daniels has been named “One of the top fifteen up & coming artists in the U.S., whose work will be transforming America’s stages for decades to come.” & “One Of 7 People Reshaping And Revitalizing The American Musical” by American Theatre Magazine.

“I’m honored and beyond thrilled to be asked to join the fantastic staff, board, and audiences of Merrimack Repertory Theatre,” says Daniels. “It is rare today to find a theatre where the patrons, staff and community are dedicated to telling great stories by contemporary playwrights all season long. When you come across that type kind of commitment to new voices, you consider yourself lucky to get to be a part of it. I truly believe MRT is prepped for growth and about to become one of the theatres for new play production in the country. Charles has done an amazing job of building this theatre to what it is today, and I’m humbled to take the baton from him and attempt to take us to the next level.

“I plan to bring the nationally-recognized audience engagement programs I created at Geva to MRT, along with the internationally-recognized artists that I’ve been working with. I’m equally inspired by the opportunity to get to work with the top notch artists living in the Boston area, and make sure MRT serves as an artistic home for them as well.

“As the third largest LORT theatre in the Boston area, it’s time for us to shed the compliment of ‘Best Kept Secret In The Area’, and continue the trend started by the A.R.T. and Huntington that the most exciting work in the country is coming out of this area.”

Daniels will be partnering with Executive Director Elizabeth Kegley to lead MRT into the next phase of the 36 year-old company’s future. Daniels will select the slate of plays for each season and oversee their production, including working with directors, designers, and the theatre’s production staff. Kegley will continue to oversee all administrative and financial aspects of the company.

Kegley remarks, “I am thrilled with the Trustees’ selection of Sean Daniels as MRT’s next Artistic Director. Sean brings an impressive breadth of experience, including his work as a freelance director and his position with Geva. He will be a terrific asset in the rehearsal room nurturing the work of talented artists, while also recognizing the challenges and opportunities of running a nonprofit theatre company.”

Stephen Irish, President of MRT’s Board of Trustees chaired the Search Committee, which worked with AlbertHall&Associates, a highly-regarded arts search firm, on the national search which lasted six months. Irish commented, “The Search Committee was blessed to be presented with an exceptionally strong list of candidates for the position. After a thorough multi-phase interview process, the committee was unanimous in its selection of Sean Daniels as the next Artistic Director for Merrimack Repertory Theatre. The entire board is confident that Sean will build upon the exceptional reputation MRT has earned for artistic excellence over the years, bringing the theatre to new heights and instilling a new sense of excitement that our subscribers, patrons and supporters are bound to enjoy.”

Daniels will begin working with MRT staff immediately to plan the 2015-16 Season. Several events are being planned throughout the spring to introduce Sean to audiences and the community and his full-time, onsite presence will begin on July 15.

Charles Towers joined MRT as the company’s third Artistic Director in 2001. In his 14 seasons with the organization, Towers selected and produced over 90 plays, mostly regional and world premieres, one-third of which he directed. He has twice won the Independent Reviewers of New England (IRNE) Award for best director. In 2012, he directed the world premiere of Jack Kerouac’s only full-length play, “Beat Generation”, which received international attention. He announced in May his intention to step down after his current contract expires, saying, “Everything has its season. After 14 years as Artistic Director, this just feels like the right time for both MRT and me.” He will continue to produce the remaining shows in the current 2014-15 Season, including “The Best Brothers” and “The Outgoing Tide,” both of which he will direct.