‘The Last Two People’ is a joyous musical ride 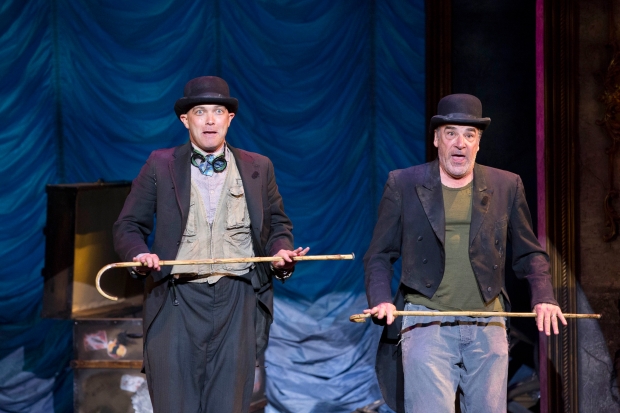 CAMBRIDGE — “And now” — as they used to say on the BBC TV show “Monty Python’s Flying Circus” — “for something completely different.”

The production of “The Last Two People on Earth: An Apocalyptic Vaudeville,” now at the Loeb Drama Center through May 31, is just that.
The co-production by the American Repertory Theatre in conjunction with Staci Levine and The Dodgers stars Mandy Patinkin and Taylor Mac as two song-and-dance men who soldier on even as climate change has made the world inhabitable and — almost, but not quite — without life.
Patinkin has always had a strong Boston following, whether he’s singing in Yiddish or songs from Broadway musicals such as “Evita” or “Sunday in the Park With George,” while playwright and cabaret performer Taylor Mac counts the ART production of his “The Lily’s Revenge” amongst his many original works.
The piece was born of a conversation between the two artists who discovered they had much in common when it came to musical tastes, and it is a series of simple joys and endlessly clever.
It’s hard to kill a song-and-dance man, even when there are apocalyptic storms or when things go horribly wrong — take Gene Hackman and Peter Boyle performing “Putting on the Ritz” in Mel Brooks‘ “Young Frankenstein.”
Storms may have destroyed earth and almost all of mankind, but somehow Mac and his lifeboat have washed up on the same spit of land as Patinkin. Mac believes he is all alone, but when a mysterious hand begins swiping his apples, he is alerted to the presence of another human — the grizzled Patinkin, a waterlogged, beaten-down, old-time song and dance man now living in a trunk.
Soon it is clear Mac’s character, clad in a bowler hat with baggy pants, prefers to live on the sunny side of the street, and the contrast between the characters is stark, Mac’s sweetly cloying expressions and Patinkin’s disdain over the cheerfulness of his new friend. But they find they can communicate through music, much to theirs — and our — delight.
Things will change, of course, over the 85 minutes and 30 musical numbers that comprise the production, as they salute vaudeville which, of course, begat musical theater, as well as silent films, with a nod to the hijinks of Chaplin and Keaton.
Patinkin’s voice has always been a great gift to the musical theater, and here with Mac there are some exquisite vocal harmonies and duets and fresh takes on older works — thanks to the orchestrations and musical direction of Paul Ford, who heads a three-piece band.
Mac and Patinkin have brought other friends along for the ride: acclaimed director Susan Stroman (“The Producers”), credited with direction and choreography, and with keeping Mac and Patinkin rowing the boat in the right direction. Designer Beowulf Boritt has crafted what appears to be a decrepit theater amidst watery backdrops while the lighting by Ken Billington and sound by Daniel J. Gerhard provides for some hellacious storms.
Both performers have their individual vocal moments, and there’s some fine comic work afoot, such as Cy Coleman and Carolyn Leigh‘s “Real Live Gal” number, featuring a blow-up doll from an earlier funny bit.
The pair has gone far and wide to assemble the musical moments, including “Isn’t It a Lovely Day to be Caught in the Rain” by Irving Berlin, songs from Randy Newman, Tom Waits, and The Pogues, with a nod to Gilbert & Sullivan and Rodgers & Hammerstein.
The eclectic musical choices will together make a statement about ourselves and the choices we make.
“The Last Two Men on Earth” is about two superb showman, having a great time, and taking you along for the ride.
The American Repertory Theatre, Staci Levine and The Dodgers production of “The Last Two People on Earth: An Apocalyptic Vaudeville.” Conceived by Paul Ford, Taylor Mac, Mandy Patinkin and Susan Stroman. Directed and choreographed by Susan Stroman. Set design by Beowulf Boritt. Music direction, Paul Ford. Costumes, William Ivey Long. Lighting by Ken Billington. Sound by Daniel J. Gerhard. At the Loeb Drama Center through May 31. http://www.americanrepertorytheatre.com.