‘Light Up The Sky’: A bygone era fondly recalled 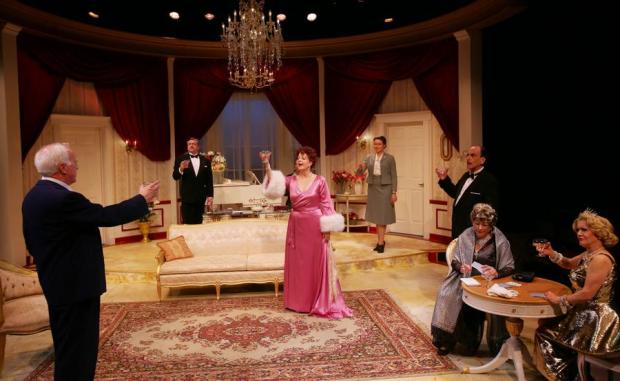 The cast of the Lyric Stage Company production of Moss Hart’s “Light Up The Sky.” Photo: Mark S. Howard

BOSTON —Yes, Virginia, the out of town tryout for new theatrical productions was once commonplace here in Boston, part of a circuit that often included cities such as New Haven and Philadelphia.
Playwrights, producers and directors hung out in bars and all-night diners waiting for the reviews from the Boston papers to come in, to know whether they to re-work the piece or start looking for work.
When out of town tryouts are held locally these days, they are held most often across the river in Cambridge at the American Repertory Theatre, which has .sent several productions to the Great White Way.
Between 1930 and 1948, Moss Hart authored, co-authored, and/or directed two dozen Broadway plays, musicals and revues, and was most familiar with the path trod by those on the way to Broadway and the characters found along the path. 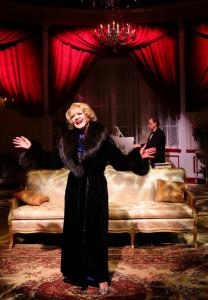 Kathy St. George and Will LeBow in “Light Up The Sky.” Photo: Mark S. Howard

Hart revisited those characters in his 1948 comedy “Light Up the Sky,” now at the Lyric Stage Company through June 13.
Hart reportedly based the characters on real-life friends from the theater world, and “Light Up The Sky” takes place in a suite in the Ritz Carlton Hotel across the Public Garden in Boston in the nerve-wracking hours before and then after the curtain comes up on a brand-new work. To make it even more nerve-wracking, it’s the first work of a young playwright named Peter Sloan (Alejandro Simoes).
Just as a good coach or manager puts players in the best position to succeed, Director Scott Edmiston has used adroit casting to put his cast of local lights in the right places to succeed.
The pompous director Carleton Fitzgerald (Will McGarrahan) is prone to emotional outbursts and weeping spells, especially when he is swept up in the glories of the new work he is directing by Sloan.
Any show that gives McGarrahan not one but two occasions to tickle the ivories of the grand piano starts ahead of the game in my book. And after a delightful “Another Openin’, Another Show” from “Kiss Me, Kate” he chips with the rest of the cast on a rousing “There’s No Business Like Show Business” for the finale.
Will LeBow is producer Sydney Black, who’s all in for $300,000 and as nervous as a cat
No one can do overwrought like LeBow, especially when things don’t go well on opening night and the $300,000 appears to be lost.
The veteran playwright Owen Turner (Richard Snee) has seen it all before, including two of his shows that starred leading lady Irene Livingston (Paula Plum, Snee’s real-life wife), and is at home with the eccentricities of theater folk. Plum has been a leading lady on the theater scene in Boston for decades, but she bears no resemblance to the diva-ish Irene, whose life is a series of dramatic scenes and crises.
Master scene-stealer Kathy St. George is at it again as Frances Black, Sidney’s wacky wife and ice-skating star (you have to suspend belief more than a bit at that, even if she did roller skate in “Xanadu“) and her partner in crime in several scenes is Bobbie Steinbach as Stella Livingston, Irene’s wise-cracking, sarcastic mother who both plays and consumes gin and swigs bourbon while viewing her daughter’s career and marital choices warily.
Terrence O’Malley is likeable enough as Irene’s understated husband Tyler Rayburn, who chooses to take in “Oklahoma!” on the night of his wife’s premiere, figuring he’ll see a better show the second night of the run — if there is one.
Bob Mussett has a nice comic turn as William H. Gallagher, a Shriner who has dreams of being a producer.
The world premiere is being held at the Colonial Theatre, a legend when it comes to out of town tryouts, and where according to theatrical legend Rodgers and Hammerstein did some extensive rewriting on “Oklahoma!” on the table in the magnificent ladies lounge on the orchestra level.
Janie E. Howland recreates a Ritz Carlton suite — my times at the Ritz never, unfortunately, included a suite — but the richness of the red drapes and the other touches vividly recall the Ritz I remember and Gail Astrid Buckley’s costumes are glamorous and period-perfect.
“Light Up The Sky” is an ode to a bygone era and as the Lyric’s artistic director Spiro Veloudos noted, when it first tried out in Boston, it flopped and was reworked for Broadway.
And while the piece is a bit musty, and the time and place may not resonate with younger theater-goers — those who may not know the Taj Boston Hotel was once the Ritz Carlton — there is great fun to be had in characters larger than life and played that way and a time when a few words in a newspaper could create either abject joy or overwhelming despair.
The Lyric Stage Company production of Moss Hart’s “Light Up The Sky.” Directed by Scott Edmiston. Set, Janie E. Howland. Costumes, Gail Astrid Buckley. Lights, Karen Perlow. Sound, Samuel Hanson. Music direction, Will McGarrahan. At Lyric Stage Company of Boston, 140 Clarendon St., through June 13. http://www.lyricstage.com

← ‘The Last Two People’ is a joyous musical ride
Robbins, Stoneham know just ‘How to Succeed’ →