Collins, Ellis shine in Gloucester’s ‘Out of Sterno’

GLOUCESTER — While growing up, we were often told about things that could stunt your growth. Smoking and not eating your vegetables I remember very well.
Well, there’s other things that can really stunt your growth, things like getting married at 16 and then being confined to your apartment for seven years.
That’s the situation in the Gloucester Stage Company’s production of Deborah Zoe Laufer‘s “Out of Sterno.”
Dotty (Amanda Collins) is a childlike 23-year-old woman who finds herself involved in little kindergarten-type art projects to while away the time before husband Hamel (Noah Tuleja) arrives home from work at a gas station each day in Sterno, a small town somewhere in America.
Dotty spends much of the early moments of the piece extolling the virtues of her somewhat confined life and pumping up the tires of her grease monkey husband (“Smell the motor oil!”), winningly played by Noah Tuleja.
We are expecting George Clooney, but we get a thoughtless lunkhead who barely gives his wife the time of day. He is a thoughtless, self-obsessed bum who spends most of his time devising excuses to go out and see other women, with the hopelessly naive Dotty accepting his excuses on good faith. 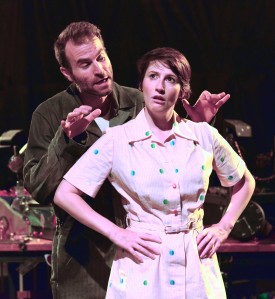 Noah Tuleja and Amanda Collins in GSC’s “Out of Sterno.” Photo: Gary Ng

Kudos to playwright Laufer for breaking down the fourth wall early, as Dotty confides in us and enlists the audience as her allies in her fight to first escape the apartment and then try to make a life for herself.
The clues to Hamel’s unfaithfulness pile up until even Dotty is forced to confront the truth.
And as wonderful as Collins is as Dotty, the piece would fall flat if Jennifer Ellis — just as at home on the Gloucester Stage as she was singing the songs of Jacques Brel or winning an IRNE Award for her luminous performance as Rosabella in “The Most Happy Fella.” — wasn’t a revelation in a completely different role as beauty parlor owner Zena.
She has taken up with Hamel, and through a series of misunderstandings hires Dotty as her assistant, renaming her Peaches, completely unaware she is Hamel’s wife.
Resplendent in her skintight pants, loud platform heels, and big hair, Zena has been married five times and is casting her net again for a sixth husband — Hamel.
She tells Dotty that Hamel has bought her a ring and plans to divorce his wife, calling her a “freak,“ signaling to Dotty that her marriage is irretrievably lost and she must take her life into her own hands.
Actor/Director Paula Plum has found herself in the director’s chair more often in recent years, and as a fine actress herself, she has the knack for bringing out the best in others and figuring out what works.
One of the things she knows works is her actor husband Richard Snee, who skillfully and hilariously inhabits a wide variety of characters — several of them females — Dotty meets along the way of her journey to freedom.
It all works gloriously, hilariously, in one of the best productions of the year.
“Out of Sterno” is many things: funny, heartbreaking, and ultimately inspiring, a tribute to the resiliency of the human spirit and to the skills of all involved.
The Gloucester Stage Company production of Deborah Zoe Laufer’s “Out of Sterno.“ Directed by Paula Plum. Set, Jon Savage. Costumes, Elisabetta Polito. Lights, Russ Swift. Sound, David Wilson. Through July 18.  www.gloucesterstage.com.

← NSMT’s ‘Shrek The Musical’: Being green ain’t easy
‘Irving Berlin’ is Hershey Felder at his finest →