Stoneham’s ‘Luna Gale’ will grip and shake you 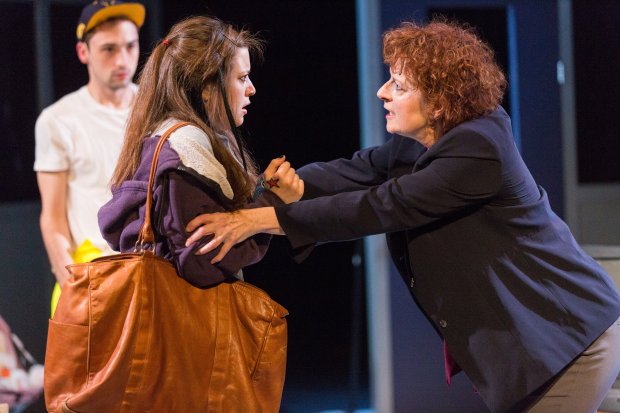 They are children whose fates are intertwined not only with their distressed families, but government agencies assigned to protect them, such as the Massachusetts Department of Children and Families.

The events in Rebecca Gilman’s “Luna Gale,” now having its regional premiere at the Stoneham Theatre, could have been ripped right from the headlines that have dominated local front pages the past few years.

It is a gripping, powerful look at the issues that social workers on the front lines are encountering each day, and struggling to do the right thing as the “right thing” constantly seems to be changing shape.

For Caroline (Paula Plum), a social worker with 25 years experience, it appears at first sight to be a textbook case of neglect in the case of two young, drug-addled parents to Luna Gale, a 6-month-old girl who has been brought to the hospital in a severely dehydrated condition that apparently went unnoticed for two days.

Karlie (Marcia DeCotis) and Peter (Luke Murtha) are meth smokers, and Peter doesn’t have a job, seemingly making Caroline’s decision to temporarily place Luna Gale with Karlie’s mother Cindy (Stacy Fischer) a no-brainer. She has her own well-ordered home, a steady job as a nurse’s assistant and licensed child care all arranged.

But in her interview with Cindy, Caroline finds something “off” about the woman and her troubled relationship with her daughter gives her pause.

Then there is her devotion to some deeply-held fundamentalist Christian beliefs. When Cindy says that she would like to begin the process to adopt Luna Gale permanently, Caroline is hesitant to completely give up on the young couple, who have begun counseling but have been unable to secure needed slots in a rehab facility that would someday make it possible for them to bring Luna Gale home again.

Caroline is carrying her own baggage, as the daughter of an alcoholic parent, a divorced, childless woman, but in another way she considers all the clients she serves are her children.

That especially goes for Lourdes (Ally Dawson), who has aged out of the foster child attending college, but whom Caroline still meets monthly, worried she will slip back into her previously troubled ways.

There is also a backstory involving the office’s former director Mimi, under whose leadership a child was lost, tarnishing the careers of all involved. Thus Caroline’s boss Cliff (Jacob Athyal) got a job he didn’t deserve when Caroline was caught up in the scandal, after which Mimi met a haunting, untimely end.

Bob Mussett’s Pastor Jay is a wild card of a character who advocates forcefully for Cindy and her right to both hold her beliefs and be entitled to adopt her granddaughter.

Caroline is forced to ask herself if she holds a bias against those beliefs, or are her decisions rooted in common sense and a desire to give the young parents another chance?

Gilman keeps upping the ante dramatically as she peels away the layers of the onion one by one as the plot takes sudden twists and turns, like the old Wild Mouse ride at Paragon Park.

Hidden connections between characters heave to the surface, along with revelations of past incidents that have impacted the current situation.

Director Rebecca Bradshaw (Speakeasy’s “Bad Jews”) has elicited pitch-perfect performances across the board, led by sterling veterans Plum and Fischer, and the brisk pacing keeps you on the edge of your seat.

Gilman’s ending will strike a guarded but hopeful tone, and a wistful hope amidst the world-weariness and resignation expressed by Caroline to Peter.

“You’re special,” she says. “You’re all special. There are so many of you and you all keep coming. I have to keep you alive long enough to have a life.”