BOSTON – It is 1962, and cross-dressing is against the law in most of the country. Those who ventured out into public were usually subject to the penalties of public decency laws and could be arrested.

Laws against cross-dressing didn’t really start being overturned until the 1980’s. In fact, a person perceived as male who dressed in clothing customarily designed for women could technically be arrested in New York for “impersonating a female” as recently as 2011.

So in 1962, one of the few refuges for men who wished to bring out their feminine sides in the company of other “women” were resorts that catered to this specific clientele, places such as Harvey Fierstein’s “Casa Valentina,” a Speakeasy Stage Company production now at the Calderwood Pavilion of the Boston Center for the Arts through Nov. 28.

The bungalow colony at Hunter Mountain in the Catskills is a refuge for not only longtime cross-dressers – who also happen to be heterosexual men — but “newbies” such as Jonathon (Greg Maraio), who is making his first tenuous venture into the world.

The establishment is run by George (Thomas Derrah), who becomes the Valentina of the title right before our eyes early in the piece.

Kerry Dowling projects warmth and understanding as Rita, George’s wife who runs the financially-struggling establishment with him.

Sean McGuirk is the kindly old Terry, everyone’s favorite aunt who has been doing this for a very long time, while Timothy Crowe is The Judge, who morphs into Amy while on one of his many “hunting trips” through the years.

Eddie Shields is the young, glamorous Gloria, who admits “I’ve actually heard a rumor that I deflowered an entire sorority house. Not true, of course. How was I to know there were rooms in the basement?”

Much of the raucous first act is the Robert Saoud Show, as the gifted comic actor takes the role of Bessie and runs with it, stealing scenes from other notable scene-stealers as a former Army sergeant with three grown children who is incessantly quoting Oscar Wilde while exhibiting a quick wit and a uber-friendly manner.

But behind the light-hearted mood there is tension, as George has received a package intended for another that included pornographic photos that postal authorities are investigating, and could mean serious legal problems for George – and the person for whom the package was intended.

There is a hilarious,  joyous makeover of Jonathon into his new alter-ego, Miranada, led by Valentina.

Charlotte (Will Garrahan) has traveled across the country to promote The Sorority, a non-profit group “she” has incorporated that will give the association of cross-dressers a legal status and a voice with which to advocate for their rights.

One of Fierstein’s hallmarks as a writer is the ability to abruptly switch tone and mood from light-heated to deadly serious and the rubber hits the road when Charlotte asks those assembled to form a local chapter, with the proviso that the officers’ legal names and addresses will be part of the filing.

Charlotte also drops another bombshell – to keep law enforcement authorities off their backs, those who are part of the group must sign  affidavits saying they are not homosexuals, and that the group must ban homosexuals and homosexual activities.

That disturbs many, including older members of the group who have found solace and friendship among those in the homosexual community

Fierstein also confronts the issue of what happens to relationships when those involved live a dual life – and that second life excludes those involved in the first life. So what if George one day decided to say goodbye to George and become Valentina permanently – what would that mean for Rita?

A dual life – any dual life – also has a human cost, as Deb Martin as The Judge’s daughter Eleanor brings to the fore in a powerful scene.

Director Scott Edmiston has worked with Speakeasy and many of the cast members before, and that theatrical shorthand is apparent in how well the ensemble works together.

Janie E. Howland’s multi-level, finely-detailed set, one in a series of beautifully-realized sets in Speakeasy productions, allows action to move effortlessly around the bungalow, and costume designer Gail Astrid Buckley has a ball in turning the men into finely-attired ladies.

If a test of a great playwright is how many different emotions he can elicit from you during the course of an evening, then the Tony Award-winning Fierstein has once again aced the test.

Visit “Casa Valentina” and prepare for the laughter, sadness and heartbreak these finely drawn characters and their lives bring forth. 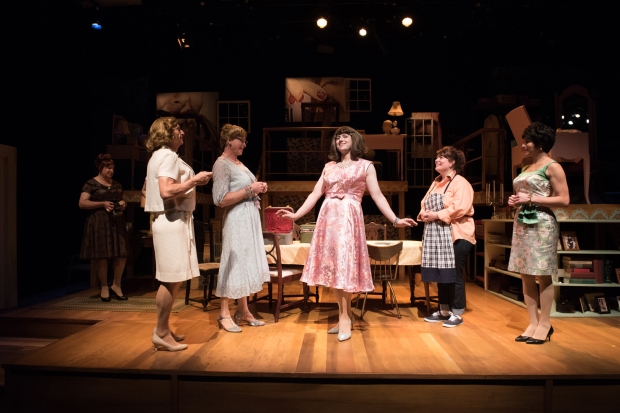