MRT’s ‘Wonderful Life’ brings out best in the season 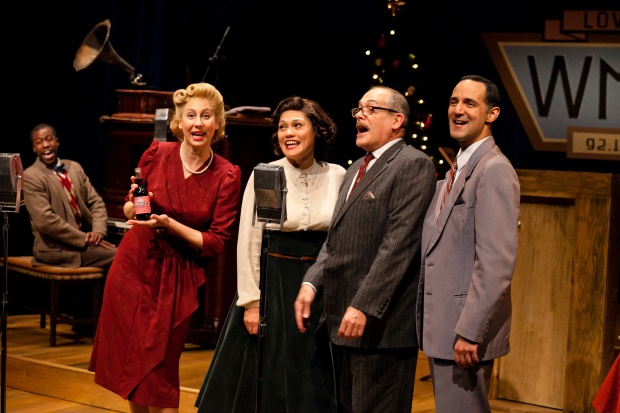 LOWELL – Frank Capra’s “It’s a Wonderful Life” wasn’t a success when the film first debuted in 1946. It never came close to earning back its $6.3 million production cost.

It was only in later years it became an iconic holiday classic, a part of virtually every list of the top movies of all time.

When playwright Joe Landry adapted the film for the stage – “It’s a Wonderful Life: A Live Radio Play” – it became an instant hit. The 90-minute piece has seen more than 1,000 productions by regional theater companies since its 2007 debut.

The Merrimack Repertory Theatre production now onstage at the Nancy L. Donahue Theatre through Dec. 20 is fast, funny, skillfully acted and directed, and a warm blessing for the holiday season.

MRT often casts actors from all over, but for this production is it cast five locally based actors and Somerville-based Director Megan Sandberg -Zakian.

In Landry’s adaptation, the premise is that five actors have come together to stage the live radio play. Landry has omitted a few details and scenes from the film to fit the show into a smaller window, but the the essence is still there. 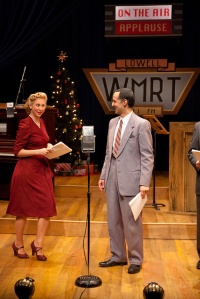 Jason Bowen as Harrry Heywood delivers a set fine of characterizations, including a spot-on Italian-American take as Martini the bar owner, and scores again as the bumbling Clarence the Angel, still second class and struggling after many years to win his wings.

Veronika Duerr has some nice moments as the alluring Violet Bick, the Bedford Falls siren who pines for Harry, but she’s never better than portraying the innocence of Zuzu, George’s young daughter, in the emotional closing scene.

Nacer captures the innate decency and honor and sense of loyalty of George, his dreams stymied at every turn, while Oliva embodies the sweetness and unlimited love and support of Mary Hatch Bailey, his wife whose application for sainthood is instantly approved when she gives up her $2,000 honeymoon jackpot to keep the Bailey Building & Loan open.

Colodner nails the cold-hearted Henry Potter and his many other voices.

Much of the fun evolves from cast members taking their turn providing the sound effects when they aren’t in a scene, or manning the upright player piano

There’s even a funny but very skilled five-person harmony for a Demoulas Market commercial as Colodner as Fillmore breaks into a basso profundo at the end.

Sandberg-Zakian keeps things flowing at a brisk pace, and everyone is on cue in the split-second timing as actors change characters at the drop of a page of script.

Amanda Williams’ three-level set features simple but effective Christmas decorations, and A. Lee Viliesis’s costumes are 1940s chic, and the players look fine in them.

In this production the five-person cast does the work of several dozen actors, forming a cohesive team that – under Sandberg-Zakian’s direction – brings out the best in each other.

And, coincidentally, the season.