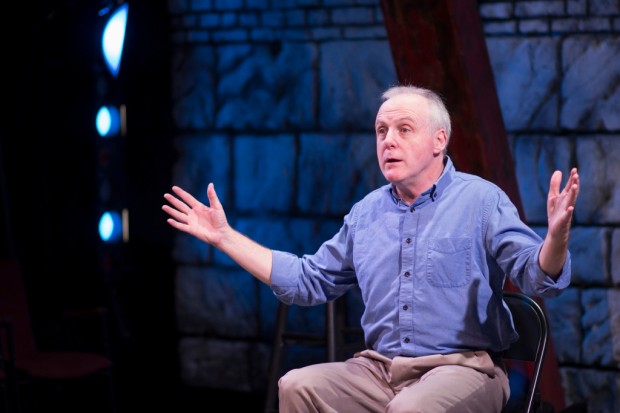 WATERTOWN – In 1997, the playwright David Hare visited Israel and Palestine to better understand the conflict in the region and to write a play based on his travels.

His journey brought him into contact with 33 people in all – including artists, politicians, and settlers – and the conversations and personal experiences became “Via Dolorosa,” now part of the New Repertory Theatre’s Black Box Festival at the Arsenal Center for the Arts.

The title is Latin and refers to the path in the old city of Jerusalem that Jesus walked on the way to his crucifixion, but its literal translation is Way of Grief, Way of Sorrows, Way of Suffering or simply Painful Way, an apt description of Hare’s trek through the Holy Land.

Actor David Bryan Jackson is playing the role of Hare, a keen observer of the human condition, and together the playwright and the actor show with many examples the wide gulf between the Israelis and the Palestinians that has proven – with a few exceptions – almost impossible to bridge, even two decades after Hare’s journey.

Hare provides the obligatory background of Israel as both a religious and secular state, including the enmity between conservative Orthodox, who were exempt at the time from military service and whose study of the Talmud was subsidized by the government, and more secular Jews who resented their special status.

He describes the laid-back hedonism of Tel Aviv, a secular city, and in the nearby port of Jaffa, Hare sips Merlot and discusses theater with Eran Baniel, who co-produced a famous production of “Romeo and Juliet” in which the Capulets were Palestinians and the Montagues were Jews, and the hatred between the two didn’t have to be manufactured – it came all too naturally.

Baniel also expresses the guilt many Israelis feel about the conditions of their Arab neighbors. “Have you been to the Palestinian territories? Look how the water is allocated. In the settlements, you have the obscene spectacle of Israelis sitting by their swimming pools while Palestinians carry their drinking water round in jerry cans… It’s un-Jewish, it’s un-Jewish behavior.”

Perhaps the most explosive and intense days of Hare’s trip are spent in the company of settlers in Sheri Tivka, a settlement miles inside Palestinian territory.

Hare spends the Sabbath with Sarah and Danny Weiss, two former Americans and Orthodox Jews who have made settling in Palestine a moral and political statement.

Sarah ends up rejecting Hare, because his wife is a Jew who has married outside the faith and the wife  has other family members who have married non-Jews.“Your wife is an assimilationist?” Sarah asks Hare accusingly.

Perhaps the best quote that Hare includes about the settlers comes from a fellow writer. “These people are absolute lunatics,” the celebrated novelist Philip Roth tells Hare. “They’re the maddest people I’ve ever met in my life.”

The assassination of former Prime Minister Menachem Begin in 1992 is still echoing across the Israeli political landscape in Hare’s talk with Benni Begin, Menachem’s son, who cites the influence and lingering effects of the Israeli triumph in the Six-Day War of 1967 on modern Israeli policy and politics.

Hare drives into the despair of the Gaza Strip, where 750,000 Palestinians live in an area that is 45 kilometers by eight kilometers, where he speaks with Haider Abdel Sharif, a popular Arab politician, who says the Palestinians must first reform themselves and the corruption of their state before they will have the moral authority to negotiate with the Israelis.

He also meets with Palestinian historian Albert Aghazerin in Ramallah, who describes the situation thusly: “We are bound up in each other’s unhappiness.”

In Jackson’s skilled hands, “Via Dolorosa” becomes a fascinating journey through Israel and Palestine, culminating in the unsolvable riddle that is the divided Holy City of Jerusalem, a sacred site for three major religions – Christianity, Islam and Judaism..

It is sad to note in the nearly two decades since Hare’s journey, almost nothing has changed. Peace remains but a mirage in the desert.

The New Rep Black Box Festival production of David Hare’s “Via Dolorosa.” Scenic design by Ryan Bates. Through Jan. 31 At the Black Box Theatre of the Arsenal Center for the Arts http://www.newrep.org