Science and sex are partners in Nora’s ‘Acadia’

CAMBRIDGE – Looking back on events that happened more than 180 years ago and reconstructing them is a bit like solving one of those huge jigsaw puzzles.

It’s easy filling in those big pieces, but the devil is in the details of those tiny pieces that actually hold the key to the mystery.

But what happens when you have few open spots yet – you haven’t quite solved the mystery – but you’re still willing to connect the dots and declare victory. Often wrong, but never in doubt.

The Nora Theatre Company’ production of Tom Stoppard’s “Arcadia” at the Central Square Theater has two modern-day literary sleuths pitted against each other in a race to find out what happened on a country estate in the early 19th Century, in an incident involving the iconic literary figure Lord Byron.

Generous dollops of sex and scandal leaven Stoppard’s piece, and keep it moving when the scientific aspects of the play – the iterated algorithms or Fermat’s Last Theorem — threaten to leave us hopelessly overmatched. Yes, it is a Catalyst Collaborative@MIT production – the initiative that brings science-themed plays to the Cambridge theater – but there’s plenty more than the science to keep you interested.

Stoppard jumps back and forth from events at the Derbyshire estate of the Croom family, Sidley Park, in 1809 to those investigating what happened in “the present day” – or 1993, in this case, when the play was written. The time period switches back and forth until the seventh and last scene, when the two eras converge and the past and present mingle seamlessly as the mystery unravels.

In the first act of “Arcadia,” the scenes from the early 19th Century are more compelling and interesting – perhaps because they delve into sex and scandal.

The action is set in a single room of the estate, where as the play begins Septimus Hodge (Will Madden) the 22-year-old tutor of his precocious 13-year-old charge Thomasina Coverly (Kira Patterson) is interrupted by a message from a house guest named Ezra Chater (Alexander Platt) , upset that Septimus has been discovered in flagrante delicto with Mrs. Chater.

Chater is a minor poet who has recently published a book called “The Couch of Eros” and Septimus butters him up like a dinner roll to distract him from Ezra’s task at hand – revenging his wife’s honor.

Thomasina is both precocious and curious – just what does a “carnal embrace” mean? – and her mathematical theories seem far beyond the ken of anyone at the time, let alone a 13-year-old.

Lady Croom (Sarah Oakes Muirhead) runs the estate with an iron hand, rejecting landscaping suggestions made by architect Richard Noakes (Harsh J. Gaggoomal) Nothing happens that she is not aware of, and that includes the doings of her brother, Captain Brice (Jesse Garlick).

Ross McDonald is given the showiest role as the literary researcher and critic Bernard Nightingale, who journeys to Sidley Park in search of information about Chater, who seemed to have vanished from the face of the earth about the time of his visit to Sidley Park.

Celeste Oliva is Hannah Dustin, his rival, who is interested in the identity of the Sidley Hermit, believed to have been in residence in the hermitage on the estate.

Bernard asks Hannah to collaborate with her on a project. Apparently, Bernard’s copy of Ezra Chater’s poetry book belonged to Lord Byron and the book contained documents that convinced Bernard that Lord Byron killed Chater in a duel. Bernard believes that Lord Byron – among others – slept with Chater’s wife, which led Chater to challenge Lord Byron to a duel and to die by Byron’s hand.

Because Lord Byron left the country in 1809, soon after Chater published his last known work, Bernard assumes he was fleeing.

Bernard, a noted lecturer, is not one to let the facts or the evidence get in the way of a possible book, lecture tour and TV appearances. He is determined to shoehorn the facts until they fit his theory of what happened in Sdiley Park.

The problem is that his theory is continually running afoul of Hannah’s more scholarly and reasoned research. “But I was on ‘The Breakfast Hour,’” he cries out as his research runs head-on into Hannah’s.

Jade Wheeler brings spark and vitality to the role of the coquetteish Chloe Coverly, who takes up with Bernard as Hannah rejects him. Matthew Zahnzinger brings warmth and humor as Valentine Cloverly, in hot pursuit of the truth about his ancestors, perusing game books and dissecting Thomasina’s mathematics notebooks, unearthing dramatic revelations about her abilities and talents.

Janie E. Howland’s set design of the Sidley Park room where the action takes place has the audience seated on three sides . Kudos to costume designer Leslie Held, especially for her period pieces

Be prepared for the length of the piece. Given a brief delay at the start and a 100-minute first act which taxed the toilets at intermission, “Arcadia” clocked in at 3 hours and 10 minutes at a recent performance, about 10 minutes longer than advertised.

Still, it doesn’t matter because with the talents of the cast and the deft direction by Lee Mikeska Gardner, the Nora’s artistic director, “Arcadia” is never less than entertaining and engrossing, even if Stoppard can’t resist entangling we classics majors almost too deeply into iteration algorithms and the laws of physics. 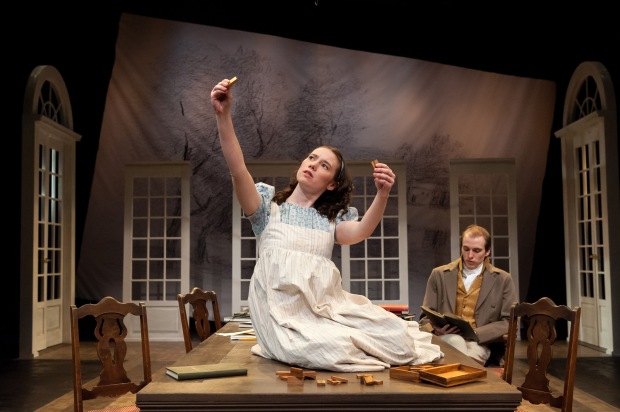 ← Huntington’s ‘Can You Forgive Her?’ is a mixed bag
‘Wizard of Oz’ reboot a treat for the eye and ears →