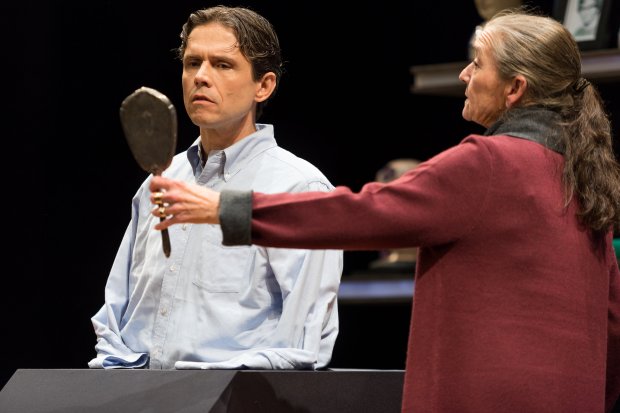 STONEHAM – The world of science fiction is quickly becoming one of science reality.

Take the world of artificial intelligence, which was explored recently on TV’s “60 Minutes,” while the Nora Theatre Company also had a take on it at the Central Square Theatre with Jordan Harrison’s “Marjorie Prime.”

The new HBO series “Westworld,” based on the motion picture, features a Western town filled with humanoids playing roles that allow the guests to fulfill their deepest – and darkest – fantasies.

As we’ve already seen, playwrights are wading into the deep end of the pool. The Stoneham Theatre production of “Uncanny Valley” by Thomas Gibbons takes an entirely different tack on the subject than the aforementioned “Marjorie Prime,” and asks uncomfortable questions about where technology may eventually take us.

The title of the Gibbons piece comes from the world of robotics and conveys the idea that people are fascinated by an artificial being that is somewhat human, but the more human it becomes, it becomes ever more creepy – and, possibly dangerous.

“Uncanny Valley” is a two-hander that fortunately stars two of Greater Boston’s most accomplished performers – Nancy E. Carroll, as a neurosceientist named Claire at a laboratory exploring ways to make a machine named Julian – played by Lewis Wheeler – more human.

The setting is Claire’s office, which features a large pedestal table that serves as the unit to contain/display the robot.

Wheeler’s Julian slowly evolves from his mechanical beginnings – he lacks limbs when we first “meet” him – and he speaks haltingly in short sentences as Claire inputs information on the appropriate way to greet a stranger.

She then slowly adds layers to his artificial persona as mechanical improvements are made;

arms allow him to play the flute, and with legs he moves haltingly like Frankenstein’s monster while he masters the art of walking .

He – it – is eager to learn and interact with actual humans beyond the level of superficial greetings or questions. As Julian quizzes Claire about her personal life, the layers of the onion are peeled away to reveal an estranged daughter named Becky and a husband named Howard, who is lowly losing grip with reality.

Gibbons drops early hints that those who are interested in pioneering on the frontier of artificial intelligence may not always have the noblest of motives, and indeed the end game to the work being done by Claire involves uploading into the humanoid a “memory file” from a fabulously wealthy businessman named Julian, just before he dies from cancer.

With the humanoid Julian absorbing the memory, personality and DNA of the dead businessman – as well as the dead man’s appearance, frozen at the age of 34 – the ethical and legal questions about who or what the new creature is and whether he/it is “human” come to the fore.

To complicate matters, the work done and the relationship that Claire forged with the humanoid are still part of the “new” Julian, and that relationship theatens to put Claire in the midst of a dispute that could redefine the word “human.”

What makes us human beings? Is it our knowledge and our relationships ? Is it our physical characteristics?

What happens if we change the equation in a bid to become immortal? Is what we create even entitled to be called a human being?

Gibbons is asking these questions in a cogent and eloquent manner, and Wheeler and Carroll – under Weylin Symes’ taut direction – are fleshing out those questions and bringing the characters to full …. life?

← ‘Man in Snow’: Love and loss on a mountaintop
‘Good’: When compromise trumps conscience →