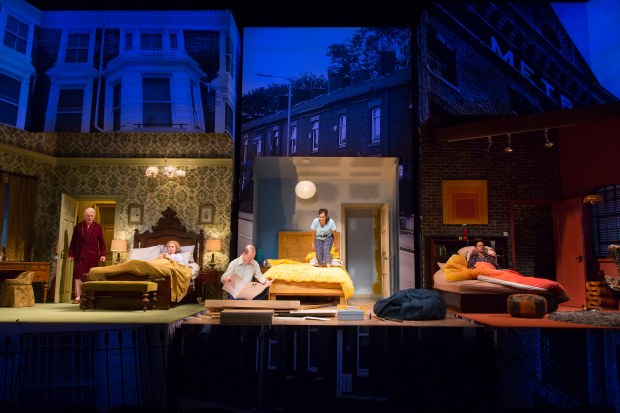 BOSTON – Alan Ayckbourn will be the first one to tell you that his 1975 play “Bedroom Farce” isn’t a farce – or at least, your traditional farce.

In an interview, he said. “The mistake that’s made is that people imagine that somehow farce has to be played louder, faster, broader – and suddenly they throw all credibility away. I have a campaign for slow, quiet farce.”

“Bedroom Farce” is an English farce of manners – no big, brawling slapstick laughs, instead smaller guffaws, cheeky humor and fingernails on the blackboard-type incidents that will cause teeth to be clenched and theater-goers to laugh.

This is the first time the Huntington Theatre Company has staged an Ayckbourn piece – the Englishman has 80 plays to his credit – and the theater has engaged as the director Maria Aitken, a frequent Huntington collaborator who directed “The 39 Steps,” which stepped directly off the Huntington stage to Broadway glory.

Aitken performed in a very successful production of “Bedroom Farce” in the UK alongside John Cleese of “Monty Python” fame and she brings that knowledge to bear in this tale that puts four couples – one of them unhappily married – into three bedrooms.

The human flies in the ointment are Trevor (Karl Miller), who’s like your friend who never figured out there was someone else in the room, and Susannah (Katie Paxton), a free-flowing, flower-girl type seemingly lacking in self-esteem.

And while that may sound like a recipe for the swapping of mates in the “Swinging 70s,” a la “Bob & Carol & Ted & Alice,” sex is only discussed, in an offhand way at that, and never actually comes close to happening onstage.

During a long Saturday evening/morning, the aforementioned Trevor and Susannah accomplish much. They first destroy the house-warming party of Malcolm ( Richard Hollis) and Kate (Emma Kaye) before Trevor wanders off to create chaos in the households of Jan (Mahavira Kakkar) and her bedridden husband Nick (Nael Nacer). Susannah, meanwhile, deprives her in-laws Ernest (Malcolm Ingram) and Delia (Patricia Hodges) of any meaningful rest while eventually booting Ernest out of his bed, to a bathroom and a spare bedroom in disrepair.

Nick’s excruciatingly painful back is made even more painful by his seemingly inattentive wife, and, later, by a most unwanted intrusion by his wife’s former beau – the aforementioned Trevor.

Nacer does frenzied, pained, and exasperated very well and physical comedy is another strong suit, a skill he showed off as Chico Marx in Lyric Stage’s 2011 “Animal Crackers.”

Hollis as Malcolm adds to the merriment as he takes great offense to his wife admitting she is sometimes “bored” during their lovemaking. He begins construction of a “gift” that requires him to bang hammers and curse loudly for hours on end, even as he laments his sexual prowess being disrespected.

Patricia Hodges as Delia gives a sparkling performance as an older woman who believes in order and structure and counsels Susannah to restore order in her relationship. But when Susannah starts to reveal intimate details, husband Ernest – who at this point in his life is often just a little bit behind what’s going on or out of it – is bewildered and sent off to the spare bedroom.

Alexander Dodge’s set features the three bedrooms side by side with Matthew Richards’ lighting guiding us to the right bedroom at just the the right time. Robert Morgan’s costumes are period perfect, and a tip of the hat to dialect coach Stephen Gabis; it’s wonderful to see a British comedy with both British and American actors where everyone is on the same page when it comes to the accents.

“Bedroom Farce” has many fine moments – perhaps not as many as the glorious production of all three parts of “The Norman Conquests” by Gloucester Stage from 2010-12 – and it’s always nice to just sit back and laugh, and for two hours put on the back burner what’s going on outside the theater.

← Trinity’s ‘Carol’: A bright bulb on your holiday tree
From St. George on down, Stoneham’s ‘Mame’ shines →