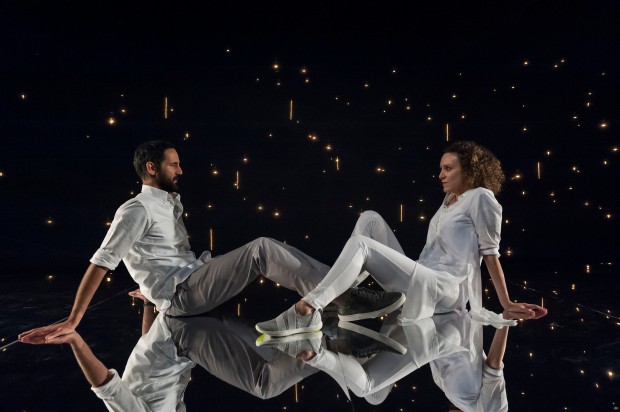 CAMBRIDGE – You don’t get a second chance at a first impression. Or do you?

At a barbecue, a Cambridge University academic named Marianne is in an awkward conversation with a man she has just met.

It’s so uncomfortable that it’s almost enough to make Roland, a self-employed beekeeper, break out in hives. (cue rimshot).

But it turns out there is a second possible version of the same meeting, and a third, and a fourth, and like two snowflakes in a blizzard, no two are the same, with subtle but often dramatic differences.

That’s what Playwright Nick Payne envisions in his play “Constellations,” now being presented by Underground Railway Theater at the Central Square Theater.

Playwright Payne’s character of Marianne, whose research specialty is theoretical early-universe cosmology, explains the basics of quantum theory on a date with Roland, and by extrapolation Payne has laid out the case for what’s happening onstage, with the same scenario being staged again and again with just slight variations, alongside each other in this universe, or in alternate dimensions or universes, perhaps, a popular concept back to my comic book days.

“Constellations” would be tricky business under any circumstances, but less so given the decision to have Scott Edmiston direct and casting Nael Nacer and Marianna Bassham, two of the most talented, versatile actors in the area, and quick on their feet. It is a necessity for this piece, with lightning-quick changes in emotions, and delicate shading of the same dialogue to create different outcomes or results.

At each of the various stages in the relationship – an awkward beginning, infidelity, a break-up and then a make-up via a chance encounter and reunion, a cruel diagnosis, and a heartrending decision – the various scenarios and tracks play out in what Payne suggests are an infinite number of ways.

A misplaced word, a nod, an inflection, and the situation turns out much differently from the one played out moments before on stag , and the characters are set off in what might be called a new orbit around each other.

It’s fun to watch as Nacer as Roland explains several times the kinds of bees there are and Marianne presents a diagnosis in bleak and unsparing terms again and again.

“Constellations” is an 80-minute two-hander with no props and a spare set, but that’s not to say that the production values aren’t important here

It’s an ethereal world the characters inhabit, including Susan Zeeman Rogers’ set that includes a series of suspended glass bulbs of different sizes upstage that shine like stars – constellations, if you will — in the background.

Jeff Adelberg’s effective lighting includes a change in the colors of the ground row of lights to signify a change in scene.

Dewey Dellay’s sound and original music works in concert with the lighting to let us know when we are about to embark on a different scenario of the same scene, or move the action forward.

Charles Schoonmaker has outfitted the characters in all-white and the overall result is a striking, sort of blank slate with anything ready to be written on it.

Bassham and Nacer prowl the stage, in sync at all times. Even when the scene calls for them to converse in American Sign Language, they seems to do it effortlessly.

Meanwhile, Edmiston’s direction assure the split-second timing is always there, and that there is a connection – sometimes tenuous – with what has happened before and what is to come.

‘Constellations” is being presented as part of the Catalyst Collaborative@MIT series, science-themed plays that have been consistently challenging, intriguing and well-presented.

“Constellations” keeps theater-goers fascinated to see what will come next, and in how many different ways it will be skillfully portrayed onstage. The combinations are seemingly endless, and that’s the point.

← The ‘New Phantom’ remains a great spectacle
Andy, Truman would have loved ‘WARHOLCAPOTE’ →