BEVERLY — It’s a simple theatrical equation: Big girl with big hair and big dreams = great night of theater for you.

The North Shore Music Theatre’s production of the musical “Hairspray” has splashy production numbers , voices designed to ring up to the rafters, and a cast determined to show you a good time.

It’s 1962 Baltimore, and typical teen Tracy Turnblad (Brooke Shapiro) lives in a loving home with stay-at-home-mom Edna, trapped under a mountain of other people’s laundry, and father Wilbur, who owns a joke shop. She’s a happy teen, crowing “Good Morning, Baltimore” as she travels city streets on the way to school.

Tracy dreams of joining her fellow teens – and especially the dreamy Link Larkin (Zane Phillips) — dancing away on TV’s “The Corny Collins Show,” but she’s a plus size, and she can’t see any role models on the show like her.

The role of Edna Turnblad has traditionally been played by a man (or, in the case of the original John Waters 1988 film, drag queen Divine), and here it is Blake Hammond’s turn to don the frumpy house dress. And she gets a chance to strut her stuff with Wilbur (Philip Hoffman) in their show-stopping number “You’re Timeless to Me.” 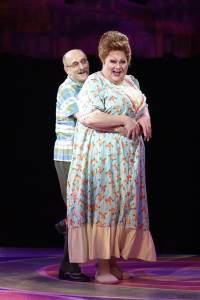 Where would we be without the requisite villain or, in this case, villainess, and Velma Von Tussle (Merrill Peiffer — insert hisses and boos here) and spoiled-brat daughter Amber (Marie Eife) more than fit the bill. They don’t allow Tracy to audition; they feel she doesn’t fit in with the taller, sleeker dancers, and, horror of horrors, Tracy catches the eye of Link, heretofore linked closely to Amber.

But later at a dance at Patterson Park High Tracy catches the eye of Corny Collins (Marty McNamee) himself, and joins the cast of kids.

Between her involvement with Link and her rather progressive views for the day – she believes every day should be “Negro Day” on the Corny Collins Show – Velma and Amber make the decision: Tracy must go!

The book by Mark O’Donnell and Thomas Meehan captures much of the spirit of the Waters’ film, on which it is based, and the score by March Shaiman and Scott Wittman is a buoyant mix of genres, dance numbers that doo-wop, pop ballads, and a generous portion of rhythm and blues, especially when Tracy becomes allies to her African-American detentionmates, whom she enlists in an effort to integrate “The Corny Collins Show” over Velma’s determined resistance.

Medford native Kevin B. McGlynn has fun as the beleaguered high school principal and several other authority figures; as principal, he puts Tracy on perpetual detention with her African-American friends, who are on board with Tracy’s vision of “colorizing” the Corny Collins show.

There’s Seaweed J. Stubbs (Stephen Scott Worley), soon to be Penny’s paramour, who enters the fray , along with mom Motormouth Maybelle (Altamiece Carolyn Cooper), and sister Little Inez (Nazarrio Workman) and the trio inject inject an instant bolt of energy into both the show and several of the production numbers, such as “Run and Tell That” and “I Know Where I’ve Been.”

There isn’t a role Cheryl McMahon can’t fit comfortably into and she is great fun as Prudy Pingleton, Penny’s very repressed and eventually horrified mother, and as a jail matron tougher than a $2 steak.

The show’s signature production number is “You Can’t Stop The Beat,” and you won’t be able to resist jumping in yourself with hands clapping and foot tapping.

Gerard Kelly’s hair and wig design have taken the big hair to new levels, featuring hirsute skyscrapers that rise so high that you wonder that the actresses don’t topple over during their dance numbers.

Director and choreographer Jeff Whiting keeps the pacing at fever pitch, making sure the next laugh or the next big dance number is never far away.

“Hairspray” wears its heart on its sleeve in its message of tolerance and can’t-we-all-get-along, even if its overstates and takes a rather rose-tinted view of the state of race relations in 1962 Baltimore.

You’ll root for Tracy, Edna, Wilbur and their allies as they prove that big is better.

← ‘Les Salonnieres’ is witty, clever and stylish
Actors hit the boards, and the boards hit back →