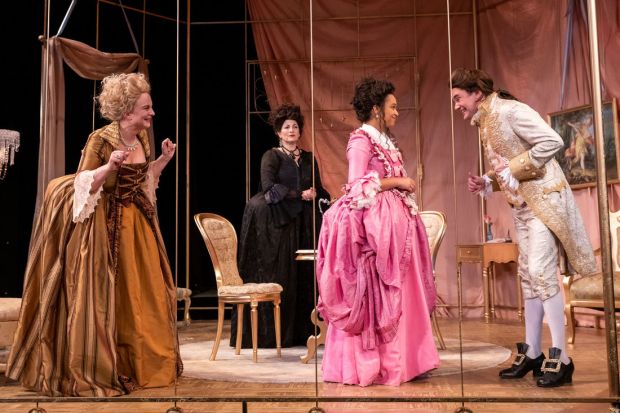 The setting is Paris in the run-up to the French Revolution, and salonierres are party hosts, women who in 17th and 18th Century France hosted salons – parties – in their homes to celebrate and promote important writers, philosophers and artists.

There is always an air of excitement when a new work shows its face to the public for the first time, and the troupe has engaged the well-regarded playwright Adams for the second production in its Don Fulton New Play Initiative.

The result a a witty, clever and stylish piece, with a fine cast and strong production values putting the work in the most positive light;

You may agree or not how Adams chose to end it, and whether it will satisfy you and is in keeping with the mood and spirit of the piece as a whole. 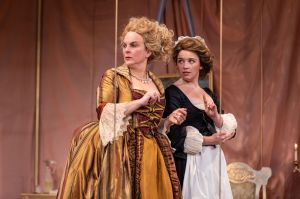 There is danger in the air of Paris. The streets are chaotic, and King Louis XVI sits nervously on the throne.

A young noblewoman named Madeleine de Sauveterre (Mata) has come to the well-appointed home of Henriette, the Comtesse de Mare, with a goal in mind: finding a way to get out of an arranged marriage.

Her mother has passed on and her father is saddled with gambling debts and Madeleine is to be given as payment in marriage to Claude, the Duc e la Bochene (Mootos), an oily, entitled, pompous nobleman used to getting what he wants when he wants it. And hell hath no fury like a nobleman told he can’t have his new female toy at the exact moment he wants it.

Claude also has buried his two past wives and is also rumored to be on the lookout for anyone disloyal to Louis.

Henriette was a friend to Madeleine’s mother, as was Gabrielle, the Marquise D’Aulney (Newhouse), another guest at the salon, who has recently returned from exile and is wearing the widow’s black after the death of her husband which many say, ahem, is suspicious.

Egged on by Claude to entertain, it turns out each woman has a tale to tell, with an agenda firmly attached to the tales, ostensibly about Princes and Beasts, but ultimately much more. They are accompanied by projections, artfully illustrated shadow puppetry designed by Christine A. Banna.

Newhouse’s tale drips with thinly-veiled venom at The Duke.

The maid Francois (Joyce) is properly deferential early on but is eventually singled out by the Duke for a special form of abuse, and when she is asked to tell her tale, foretells what it is to happen soon.

“Les Salonnieres” is a period piece, but one that manages to connect the beginnings of the French Revolution with a kind of feminism forbidden – make that completely unknown – at the time. And the Duke, of course, is awash in the kind of behaviors that are still manifesting themselves today.

The Duke will eventually be hoisted on his own lecherous petard. And the ending is ,,, the ending.

Director Weylin Symes directed three of the cast members — Latreille, Newhouse and Mootos – in “That Hopey-Changey Thing” at what was then the Stoneham Theatre, part of the acclaimed Apple Family Plays series, and they shine again here.

Symes also assembled a keen set of designers and presided over a new work that, again, pleases the theatrical palette in so many ways that you should come away satisfied.