CAMBRIDGE – When cultures clash, even the well-intentioned and righteous – or is that self-righteous? – can suffer.

When Christian missionaries came to Africa, often ahead of the colonialists and settlers who came later, it was a trade-off for the indigenous peoples who came in contact with them.

The missionaries educated and in many cases protected the converts – especially women – from the abuses of the patriarchal societies of the region, with women, for example, often forced into unwanted or polygamous marriages.

But that same relationship set them apart and put them at odds with their families, the nexus of the Uinderground Railway Theater’s production of Danai Gurira’s “The Convert” at the Central Square Theater.

The zeal of the converts provided the missionaries with sturdy soldiers for Christ, helping them spread the word and garnering more converts. But in the wake of the missionaries came colonialists and settlers eager to dominate the country and take over its natural resources, operating under the mantra “for the good of the people.”

The natives – even those who converted – began to resent both the missionaries, and the unjust taxes and forced servitude imposed upon them by the colonial powers.

“The Convert” is set against the backdrop of restive native people in what is today Zimbabwe, but in 1895 was a series of smaller nation-states inhabited by the Shona and Ndebele people.

“The Convert” features an excellent cast headed by Maurice Emmanuel Parent as a dedicated Roman Catholic missionary named Chilford , who converted to Catholicism as a child and left home at the age of 9 with dreams of becoming a priest some day.

He speaks in a stylized, formal British accent, albeit flavored with African rhythms, and lives comfortably in a well-appointed home in Salisbury (now Harare). The home, as designed by Jenna McFarland Lord, is situated at the center of the theater with members of the audience on either side, facing each other.

Chilford has a job with the British Native Commission but he has also made it his business to recruit as many converts as possible, starting with his Shona housekeeper, Mai Tamba (Liana Asim), who feigns interest in Catholicism – her “Hail Mary” veers hilariously off the rails – while also worshipping her ancestors and distributing pagan amulets around the home as she works.

She begs Chilford to hire her niece Jejesai (Adobuere Ebiama) to help around the house; Mai Tamba hints to Chilford that her niece will also be receptive to converting, which piques his interest even more. He hires her, but he promptly renames her Ester, her new name serving as the first wedge between her and her family.

Chilford soon steps to the fore, batting back attempts by Jejasi’s uncle (Paul S. Benford-Bruce) and her cousin Tamba (Ricardy Charles Fabres), who have come to reclaim her to force her into a marriage arranged by the uncle after the passing of Jejasi’s father.

Soon Ester is Chilford’s protege, enthusiastically learning English, the tenets of the church, denouncing the ways of her family, and seeking more converts to make Chilford look good – and help him reach his goal of the priesthood.

She is a woman with one foot in the world she has always known and another in Chilford’s home , where English is the language of choice and where she is forced to choose between  the customs and beliefs of the church and the white settlers – or her family.

“The Convert” also features a searing performance by Nehassaiu DeGannes as Prudence, the uber-civilized and well-spoken fiancee of the rascally Chancellor (Equiana Mosieri), Chilford’s friend whose preferences are more worldly and carnal than Chilford’s and who expresses a prurient interest in Jejasi that will have troubling consequences.

Prudence will eventually realize.fully — as will other characters – that when push comes to shove, white is still white and black is still black, and it matters not your language or education, as she bitterly accuses those involved in “savage soul-saving” who can casually kill when the time comes. “Whites throw you in the ground, cross themselves, and go off to tea,” she says.

Playwright Gurira, as Underground Railway Theater Artistic Director Debra Wise notes, refers to herself as “Zimerican.” Born in Iowa to African academics, Gurira spent her childhood in Zimbabwe and is an Obie-winning playwright (“Eclipsed,” “In the Continuum”) a stage actress (“Joe Turner’s Come and Gone” on Broadway) and TV actress (“Treme” and “The Walking Dead”).

“The Convert” is heavy going when several lengthy exchanges between characters are performed in the Shona dialect, but the actions of the characters and the context of the exchanges make it easier to understand what is being said.

Director Megan Sandberg-Zakian and her cast are en pointe throughout as the tension rises, and the production never lags, important as “The Convert” runs two hours and 45 minutes with two intermissions.

“The Convert” is an emotional, wrenching experience, especially so when the Shonas rise up against their colonial masters and events spiral out of control to a shocking ending. 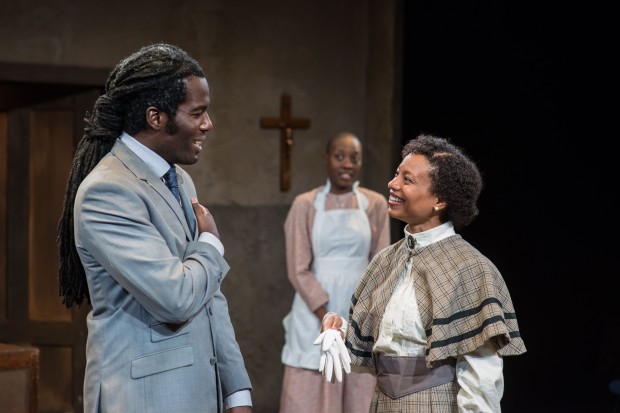