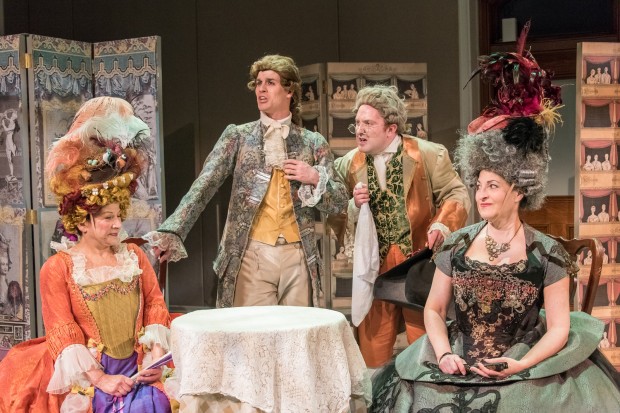 CAMBRIDGE – The Actors Shakespeare Project has had a strong record when it chooses to detour from The Bard’s canon, with critically-acclaimed productions such as Chekhov’s “The Cherry Orchard” in 2014, the award-winning 2015 production of Jenny Schwartz’s “God’s Ear” and currently “The School for Scandal,” Richard Brinsley Sheridan’s classic 1777 situation comedy of manners now being staged at the Cambridge Multicultural Arts Center, one of ASP’s favorite regional homes.

Sheridan’s witty repartee and characters are right in the wheelhouse of a talented cast, and you would expect them to hit it out of the park, and they do, even with several of the cast doubling and tripling up on roles.

It would make sense that the APS regulars’ love of the language would find a strong kinship with Sheridan, and the result is a comic delight, a witty theatrical playground set in an era before social media and talk shows, when dirt and gossip were still all the rage, and the pursuit of sex was done covertly and often hilariously.

The piece was adapted by the uber-talented ASP member Steven Barkhimer – I’m pretty sure Sheridan never included a ditty called “I Don’t Give a Damn About My Reputation” in his version, but here it is performed by the cast both before and after the production, to the delight of the audience.

As a playwright, Sheridan never hesitated to telegraph his punches with some of the great names for comic characters such as Lady Sneerwell (Sarah Newhouse), who plots and schemes with the aid of her underling, Snake, one of two roles that rock us by Lydia Barnett-Mulligan. As Snake, she hisses, lisps and commits dirty deeds, and as Lady Teazle, the much younger bride of the wealthy but anxious Sir Peter Teazle (Gabriel Graetz), she feigns love and allegiance to Sir Peter even as she seeks greener, younger pastures. 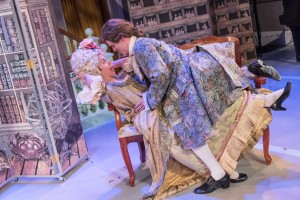 Much of the action centers around the exploits of the Surface brothers The refined, more elegant Joseph Surface (a dashing Michael Underhill) is seen (perhaps incorrectly) as more virtuous than his profligate brother Charles (Omar Robinson) , who has drunk and gambled his way through his inheritance from his father, and then decides to sell off even the most precious family heirlooms to someone who is – unbeknownst to him – is none other than his uncle Sir Oliver Surface, a longtime benefactor who has come to check out the doings of his nephews.

Anyone who has watched Richard Snee juggle several characters – sometimes of both genders, seemingly effortlessly, as he did last summer’s “Out of Sterno” at Gloucester Stage – shouldn’t be surprised that he shines both as Sir Oliver Surface and Sir Benjamin Backbite, while also morphing into two other characters, depending on which of his nephews he happens to be speaking to at the time.

Keeping the romantic entanglements – real, imagined and desired – straight would require an extensive road map. Suffice it to stay that the wealthy heiress Maria (Rebecca Schneebaum), a ward of Sir Peter Teazle’s, is also heavily involved in the sexual intrigue.

Bobbie Steinbach never disappoints, here in double duty as Mrs. Candour and a cross-gender supporting role as Moses, the money-lender

Set designer J. Michael Griggs uses the Cambridge space in a new configuration from ASP’s previous productions but the hall has a vibe that suits the play well.

Paula Plum oversees it all, making sure the comic timing required for some of the play’s more chaotic scenes is just right and none of the wit and style of Sheridan’s work is lost in the delivery by the actors, or the skilled adaptation by Barkhimer.

Sex, scandal, and comedy deliciously delivered. What’s not to like?

← ‘Wizard of Oz’ reboot a treat for the eye and ears
Lyric’s ‘Mr. Burns’: Discomfort without the payoff →